Although business may pay the most attention to a project’s cost and schedule, stable and predictable operational performance has the strongest effect on a project’s return on investment. It doesn’t matter how cost effectively or fast a project was executed if the asset doesn’t work. Owners would be better off investing their money in the stock market. Moreover, the most valuable product a unit makes is in the first months of operation. Projects with large losses in the first few years following startup cannot recover the NPV that has been lost.

IPA has collected extensive early operational performance data on projects to understand how well assets perform in early operations and whether they achieve their intended value. Through extensive research, we have found that business-led decision-making on the factors that drive project economics is significantly more influential than technical or design shortfalls in shaping the early operations. That is, business decisions contribute to operability success or failure more often than technical problems.

To diagnose the specific causes, we looked at projects that made less than 80 percent of their design, or nameplate, capacity in the first 12 months of operation due to external failure-modes as a result of over-optimistic (or in some cases woefully flawed) business planning. Whether or not the low production rate was planned, these projects still represent highly under-utilized assets. Some of the projects were marginal investments to begin with; others were disasters that failed to deliver any return on investment whatsoever due to owner companies misjudging the external risks.

As shown in the figure below, the most common major loss categories included: 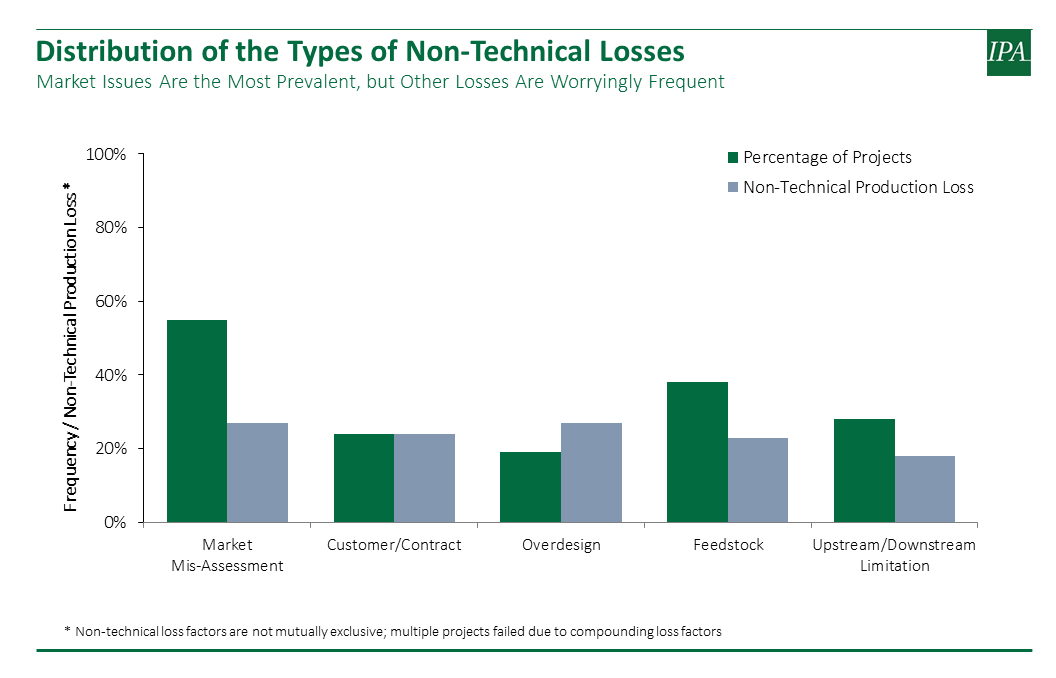 We found that market mis-assessment issues were the most prevalent, occurring in about half the affected projects. We also noticed a common perception among owners is that market losses resolve themselves eventually. However, our data show that these losses do not disappear after 12 months—or even after 18 months—and hence added a minimum of 2 years to the planned economic recovery.

The other factors shown in the graph above were worryingly common, occurring in 20 to 30 percent of affected projects, and contributing at least 25 percent to production loss. Notably, these issues were much more prevalent for new standalone facilities, projects designed to enter new markets or regions for the owner company, and projects deemed “strategic investments” by their business sponsors.  Capital projects deemed strategic investments require even closer scrutiny to avoid being a colossal waste of capital.

The taxonomy of the root causes of failure is broad, but can generally be broken down to projects that:

Owner companies cannot let market uncertainty be an excuse for failure. Thorough examination of the business opportunity and risk is critical in the transition process between the business shaping and scope definition phases. This is crucial to translate the opportunity into an asset tailored to meet the real need, while minimizing the capital wasted in under-utilization. Whatever else owners do, rushing to the market too often kills project economics. The early FEL process should be as much about challenging the business case assumptions to develop the right project as it should be about setting the right project up for success.

Examination of successful projects that were able to avoid the pitfalls of early production disasters uncovered some key practices that allowed the project team to define a scope that was aligned with the real business need:

Finally, successful projects had a healthy back-and-forth, a communication equilibrium, between the business and project teams while discussing the economics and trade-offs. IPA’s Business and Engineering Alignment Meeting (BEAM) is one tool that can improve decision quality by formally facilitating this discussion. It is also a good time to challenge the business teams if the process is being rushed or fast-tracked. Finally, the exit criteria should be clear. The key question to ask is: How much of a loss can the business case handle losing before the project becomes unviable?

Clearly, with so many influential risk factors, there is no magic bullet to avoid every pitfall. But owners owe it to their stockholders to reinforce the early discussions between business and project teams to make sure projects are inoculated against future uncertainties.

Complete the form below to discuss your projects’ operational performance with IPA.