Without question, projects executed in emerging-markets are exposed to additional risks, including unstable market conditions, political distress, local procurement challenges, regulatory issues, uncertain labor availability and productivity, staffing challenges, and safety issues. These elements clearly call for a customized approach for managing these projects to account for the risks carried by the context.

However, while risks seem high in these areas, companies and investors frequently, and mistakenly, correlate these areas with systematic low cost project competitiveness.

Consider the Asia Pacific region. IPA’s downstream database shows that industry projects in that region have the highest owner hours compared to Europe and North America.1 However, as shown in exhibit 1, we also found that industry owner costs are, on average, higher in Europe than in Asia Pacific.2 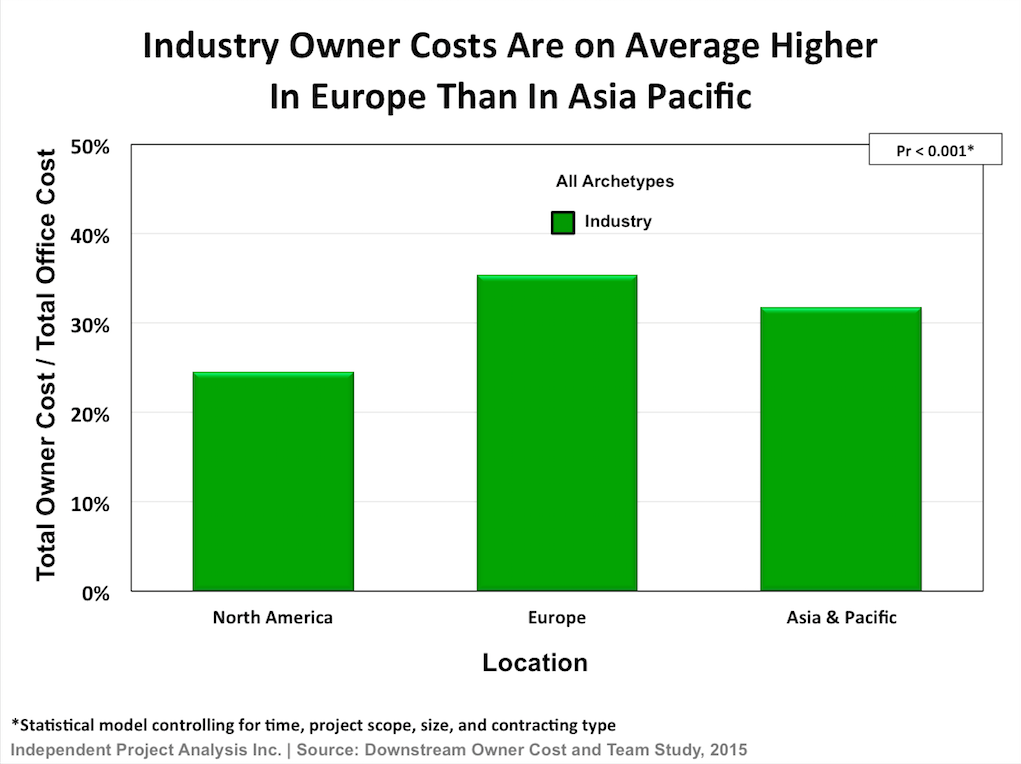 At one international oil and gas company, for example, we similarly found that while having the highest owner hours, the company’s Asia projects are more cost competitive in the same region compared to Industry and to its other projects in regions such as North America and Europe. Such findings create the right debate for the project organization, pave the way to a root cause analysis determining the factors that drove such outcomes by each geographical area, and certainly help business explore new aspects of the strengths and weaknesses of the organization.

For the same company, the geographical comparison between projects was only the discussion’s starting point. We also found that its Asia Pacific projects were, in fact, better defined, on average, than the rest of the projects in Europe and North America and, therefore, were better prepared for success despite the challenging environment.

The Power of Project Related Analytics

With various ongoing projects in various locations around the world and with projects competing for resources, project management offices at major companies tend to be constantly challenged over staffing decisions, competencies development, and maintaining and improving competitiveness. However, in the absence of a regular and reliable quantitative and qualitative project evaluation system, the risk remains high that leadership’s attention is focused on low performing projects while overlooking the necessity to understand and maintain the success of top performing ones.

Provided rigor is the basis for consistently comparing projects across regions, companies could benefit from a similar kind of analytical approach in their internal assessments and also in developing their investor relations.

This article is the second of a series of articles depicting several aspects of downstream project office costs. Data used were extracted from IPA’s Downstream Project Office Cost Study, which was performed for one of IPA’s clients. The study characterized time trends in the client and industry downstream owners costs and staffing, showed where the client was comparable to or different from Industry, identified links to overall project outcomes, and opportunities for the client to improve its project performance through owner staffing strategies.