Years of capital projects research and consulting work with owner companies has fortified IPA’s understanding of the project sponsor’s role in generating and maintaining conditions that maximize a project’s business value. Unfortunately, IPA’s research also confirms that project organizations are not doing enough to define and bolster the sponsor’s role.

IPA’s latest Industry Benchmarking Consortium (IBC) research study, Getting the Project Sponsor Role Right, which examined the sponsor role for a recent set of major projects, lays bare some of the obstacles. In our study, more than a quarter of the project teams recently surveyed by IPA were not even sure their project had a designated sponsor. Reasons vary—some companies don’t define the sponsor role; in others, the role is “shared” across multiple personnel with unclear, and sometimes conflicting, direction and accountabilities; and some project teams look to their internal projects group leadership to provide the sponsor role. 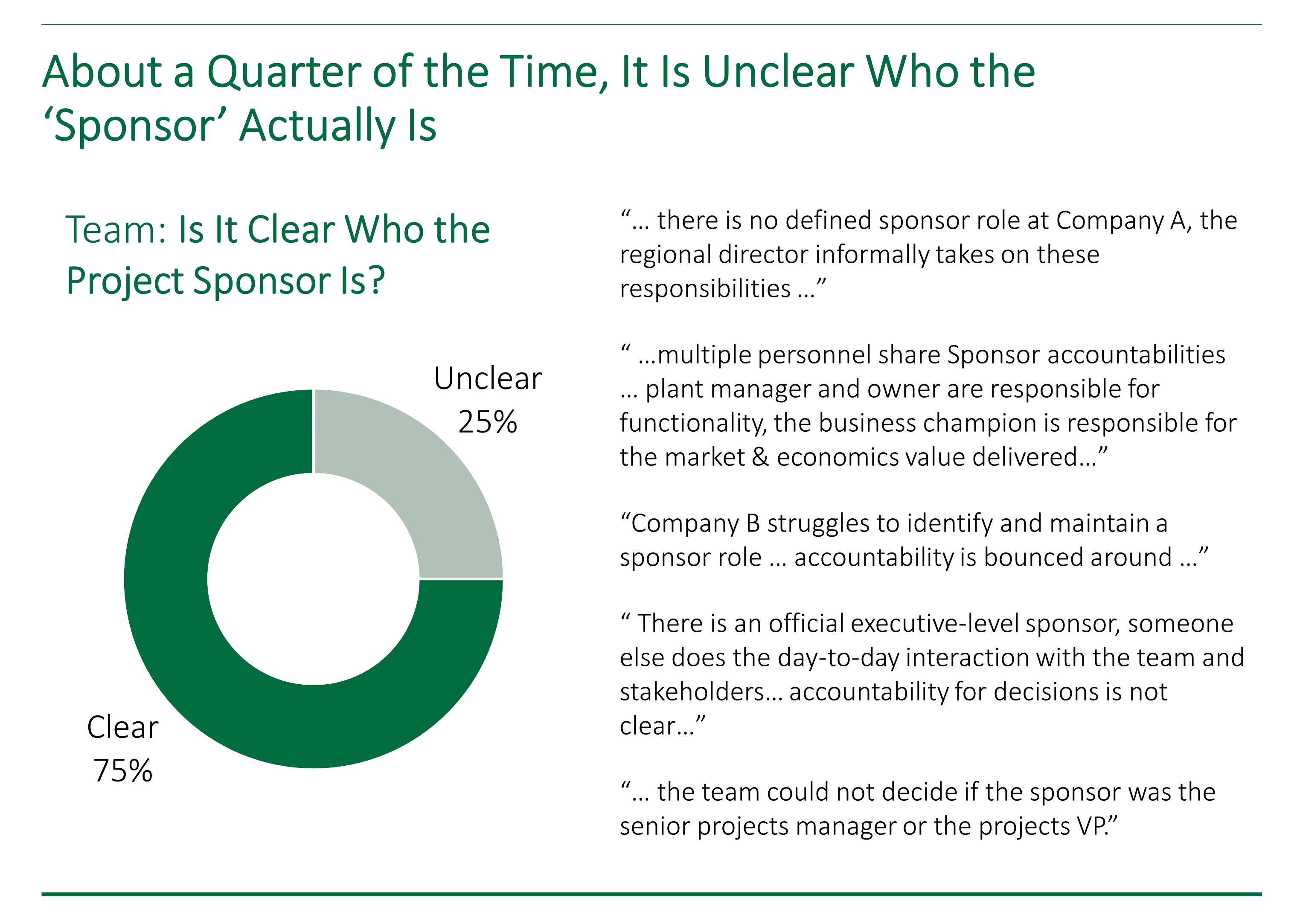 Our data show that without a single point of accountability to establish and communicate business objectives, teams are far less able to articulate the priorities and trade-offs, a necessary component of defining and planning projects to maximize business value. More telling, however, are the insights IPA gleaned from surveys and interviews with sponsors themselves about how empowered they are to succeed.

The sponsor is the primary proponent for the project—the person who wants to obtain business value from the project and the person who promises the value from capital spent. The project sponsor ensures the conditions are set to maximize value by providing the project team with the guidance, resources, and support necessary to achieve its business objectives. Of course, if the role of the sponsor is to actively integrate the entire organization around the project, then it requires the sponsor to have the position and capability—and time!—to do so.

But, IPA’s latest research shows that project sponsors often do not see themselves as being in a position to set the conditions for project success across the entire lifecycle. The majority of project sponsors IPA surveyed, approximately 70 percent, are in the role by default (based on current functional position and core responsibilities of that position) and most could not describe how their background and experience would enable them to be successful in this role. This is in contrast with the 30 percent of sponsors appointed to the sponsor role, who could all clearly articulate the reasons why they were qualified to deliver the investment’s promised value.

Whether designated as the sponsor by appointment or by default, less than half of the sponsors IPA surveyed said they were provided with documented roles and responsibilities (R&Rs) instructing them on how to carry out the function and what they were accountable for achieving, and less than a quarter of those surveyed received any kind of project sponsor training. 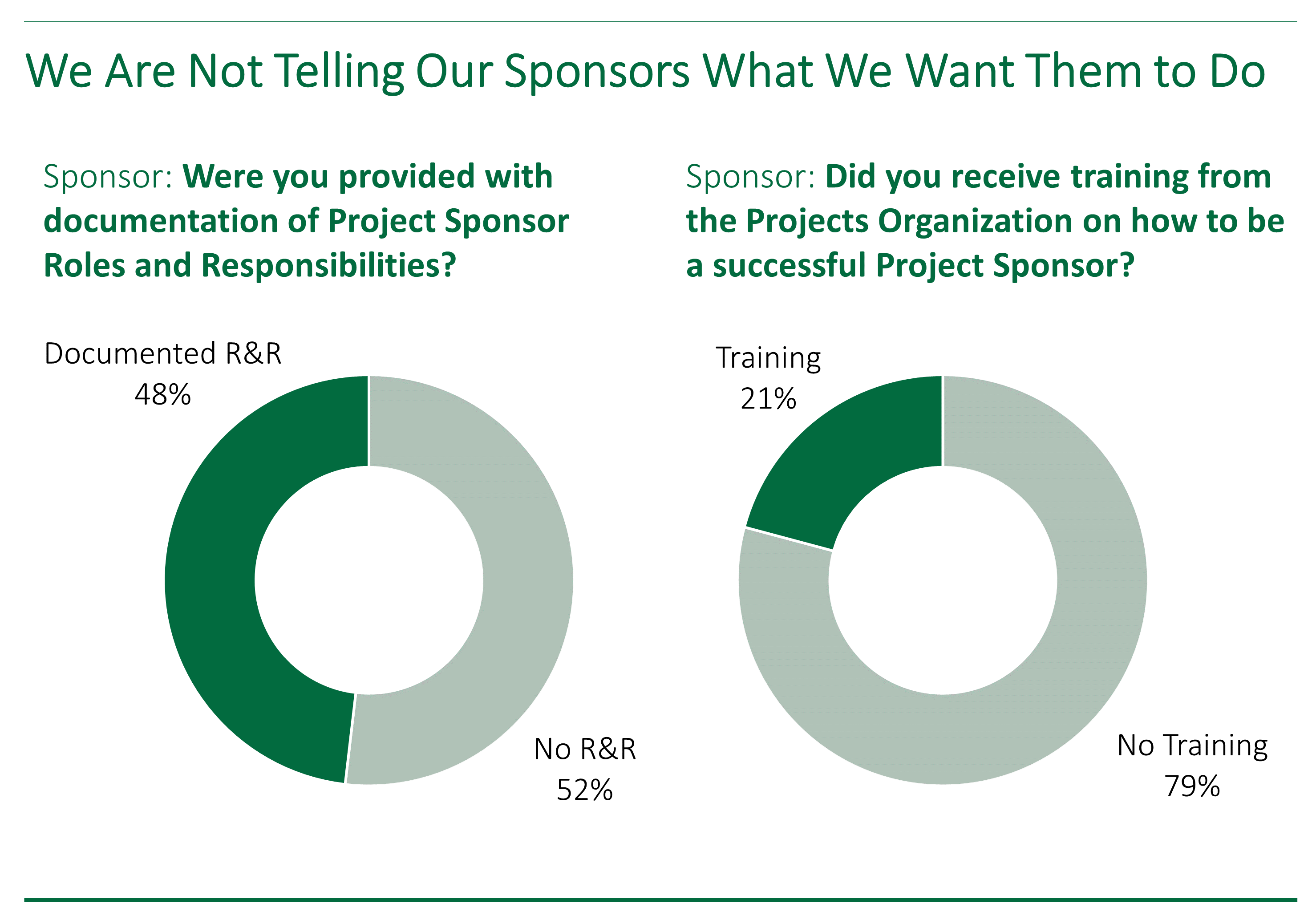 Sponsors operating without documented R&Rs tended to discount their role in providing business value trade-off decisions during project development and in ensuring the project team has the necessary resources to succeed (versus sponsors with documented R&Rs). And, we find that teams’ assessments of their own functionality—particularly the cohesiveness and communication among team members on roles, project management, and project vision—are significantly better when the sponsor role is documented.

The most telling relationship, however, is between the defined sponsor role and project definition work done in FEL 2. Clearly articulating the sponsor role (i.e., telling the sponsor what they should be doing) means that sponsors know what teams need (in terms of understanding of objectives, decisions, etc.), enabling them to complete critical FEL 2 phase work.

IPA’s interviews with project sponsors clearly indicate that they care about the projects they are sponsoring; they want to do a good job in the role. It is up to the projects organizations to give the sponsor role the attention it deserves:

IPA’s Capital Solutions group has devised a roadmap that owner companies can follow to give the sponsor role the attention it deserves. A new sponsor training class is available for clients seeking to strengthen the function within their project organization. IPA can also work alongside an organization to help get project sponsor R&Rs right to protect business value throughout a project’s entire lifecycle.

Complete the form below to contact us and learn more.