Consumer Products projects are different from those from other industries that IPA works with in a number of ways. Their typical business drivers and project objectives are different, as are their typical project system characteristics.

The most distinguishing characteristics of Consumer Products projects are their market-driven mentality and drive for speed. This makes sense: the company that gets to market first is able to capture a larger market share sooner than its competitors. Therefore, focusing on speed in execution is often the priority for these companies.

Given that these projects value time to market more than capital cost, IPA set out to determine if industry practices identified by IPA research as Best Practices actually drove faster schedules on Consumer Products projects. The dataset used was extracted from IPA’s database and consists of only Consumer Products projects that are producing something that goes directly to the consumer (e.g., boxes of cereal or soap, etc.). These projects tend to exhibit the characteristics described in the chart above. In total, the dataset had over 200 projects with about 90 percent executed in North America; the remaining 10 percent are scattered around the world. The average cost of these projects is about $10 million and all used conventional technology. 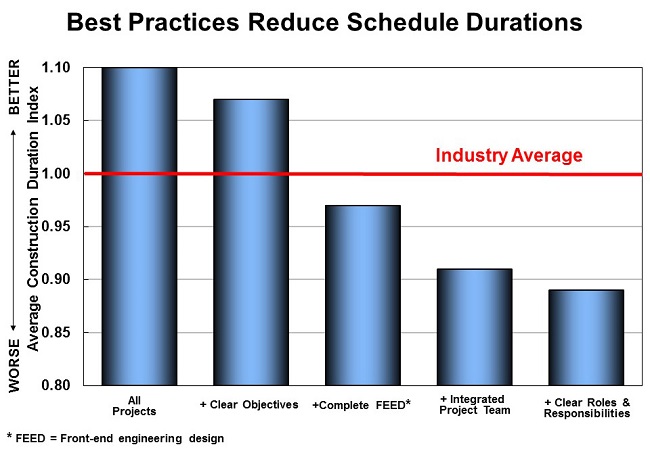 The data shown in the figure to the right are based only on the Consumer Products projects database described earlier. Given the emphasis on schedule for these projects, IPA looked for correlations with project schedule performance. The average Construction Duration Index (how fast a project is constructed relative to Industry) is shown on the vertical axis. Across the bottom, the progressive influence of industry practices recognized by IPA as being Best Practices for Consumer Products projects in relation to construction schedule duration is shown. The far left bar shows the average for the entire dataset, which is about 10 percent slower than Industry. Construction is about 3 percent faster when projects have clear objectives (as measured by IPA). When projects have clear objectives and have completed all FEED deliverables at authorization, they gain another 10 percent in speed and are faster than global Industry by about 3 percent. Add integrated project teams into the mix and the average construction duration is 8 percent faster than Industry. Lastly, if team member roles and responsibilities are clearly defined, then projects achieve 12 percent faster construction, on average.

There is a common perception that it takes too much time to use IPA’s Best Practices. After looking into the data, this simply isn’t true. There is no correlation between the project definition phase duration and engineering maturity at authorization. In other words, some projects go fast in project definition and achieve advanced engineering at authorization, whereas other projects that go fast do not.

Although some are not true believers in IPA’s Best Practices, based on the data shown, not only do Best Practices apply to the typical market-driven Consumer Products projects, but they also drive the faster schedules these companies desire. As such, these Consumer Products companies should focus on the practices that truly deliver better business results through capital effectiveness.