The second in a series of three case studies explaining IPA’s floating production storage and offloading (FPSO) project assessment capabilities, this case study details how IPA helped a client who was unfamiliar with executing FPSO projects to better understand the risks, lessons learned, and root cause failure modes of FPSO projects. The other two case studies discuss Market Insights for FPSO Projects and Measuring the Performance of Harsh-Environment FPSO Projects.

A large, technologically advanced E&P client with a successful track record of delivering complex and technically challenging projects amassed a portfolio of projects requiring an FPSO as a potential concept, many of which are outside the client’s core area of operations. The client also had little experience executing such projects. As a result, the client’s project organization had limited understanding of the risks, lessons learned, and root cause failure modes of FPSO projects, or of the strengths and weaknesses of the FPSO supply chain.

The client sought to ensure that the teams working with this “new to company” concept characterized the risks faced by similar projects executed by the E&P industry. The client sought to feed this information back to its projects to ensure it could review its risk registers and execution strategies and develop robust risk mitigation measures based on industry experience. Essentially, the client wanted the teams to conduct a pre-mortem, grounded in data.

The solution to the problem was to use IPA’s rich empirical database of projects, which contains not only key project outcomes such as cost, schedule, and production, but also forensic accounts and detailed execution histories of events, key decisions, and changes and their root causes and effects. These details are captured and documented from FEED through startup and supported by native client documentation, including lessons learned reports, risk matrices, claims information, change logs, risk registers, and variance analyses. We reviewed this information to identify common risks and lessons learned for more than 120 FPSOs in IPA’s database.

For the assembled dataset of FPSO projects, the case studies were comprehensively reviewed and the quality events/issues, mitigations, and effects cataloged. From this detailed review of each project’s execution, IPA pinpointed the risks identified before FID, risks that actually affected the project, mitigations planned and those actually needed, and lessons learned. 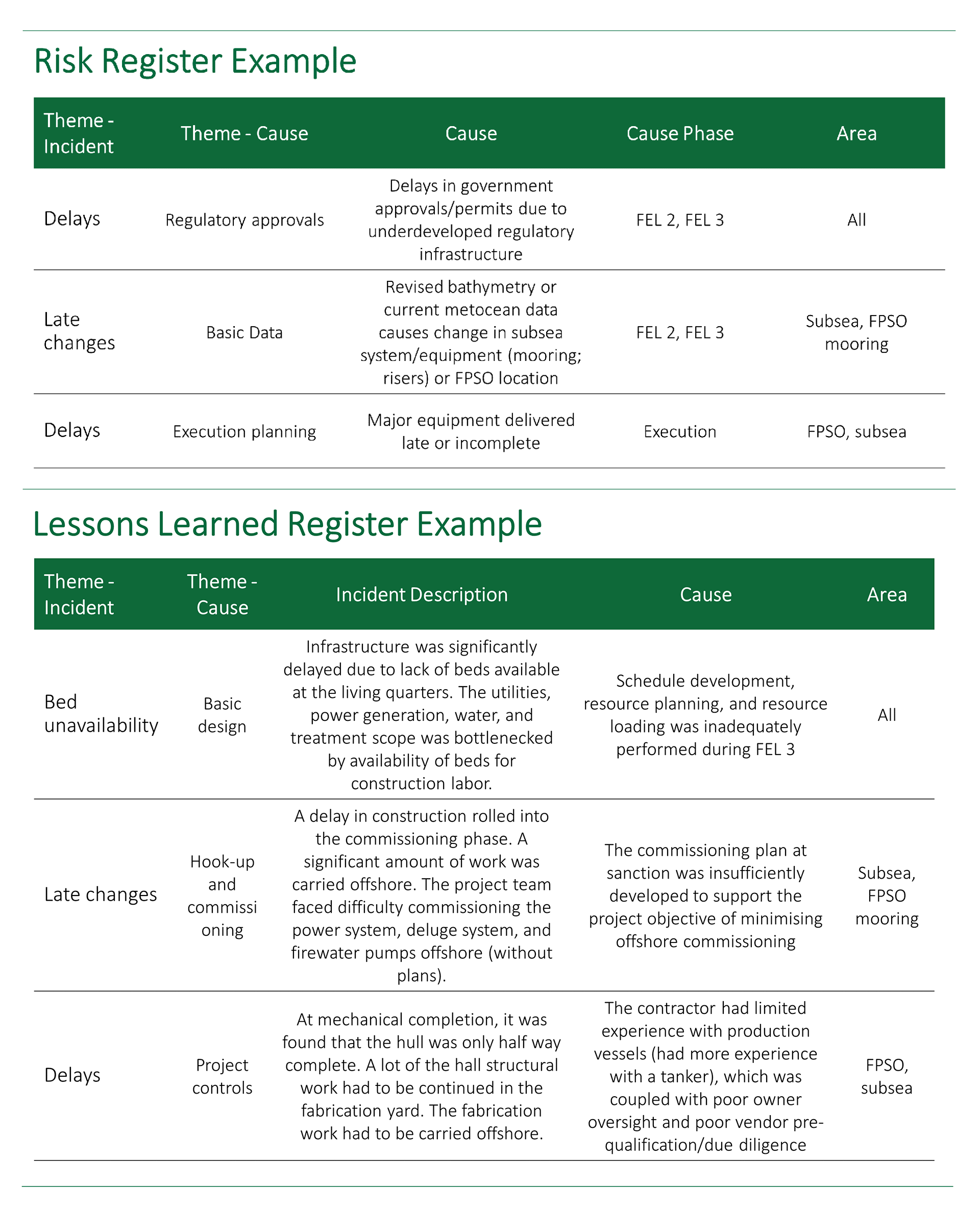 Risk Register and Lessons Learned Register examples shown above for illustrative purposes only.

The study provided the client with insights into industry performance in FPSO projects and provided many risks and lessons learned that the client had not envisaged in its FPSO projects, highlighting the benefits of the exercise. The client found that its risk registers and mitigation plans were insufficient and did not include many risks that had materialized in similar industry projects, which is the most common problem with risk workshops as they are conducted today. Participants can have a difficult time imagining risks that they have not experienced, and risks are regularly dismissed as flukes unless the participants are shown the frequency of occurrence. The lessons learned enabled the client to understand the root cause failure modes of similar projects, and, because of the diversity of data and richness of the project histories in our database, we were also able to provide the client with examples of mitigation actions that worked and actions that did not. This allowed the client to conduct scenario sessions to test the robustness of project plans and to plan, in detail, how the team would respond if the project experienced similar challenges.

A pre-mortem, based on frequently occurring empirically based risks and mitigations that work, is a much better approach than traditional brainstorming in risk workshops. The fundamental downfall of traditional risk workshops is that they cannot identify all risks simply by brainstorming. There is inherent outcome bias, because, if a previous project turned out to be successful, we tend to view the risks as unimportant, even if the risks were present. Empirical databases like IPA’s that capture industrywide information on close-calls, errors, and changes help overcome such biases, and IPA’s pre-mortem workshop helps to put the process of identifying and mitigating risk into action.