Silicon Valley companies are famous for their ability to foster innovation, disrupt norms, and usher in change. The contributions in the digital realm of Silicon Valley’s Big 5 tech companies—Amazon, Apple, Facebook, Google, and Microsoft—are known by all. While the core business of the Silicon Valley giants is in the digital realm, these companies are increasingly spending real money on real infrastructure. This appetite for capital spending on buildings and data centers is driven by the need to accommodate ever-growing staffing levels (Alphabet Inc. [Google] in 2018 alone added 18,661 full-time employees for a total of 98,771 by year’s end), in combination with unprecedented demand for data hosting and network infrastructure. Concurrently, with rising uncertainty regarding the world’s dependence on fossil fuels, the top five listed energy companies as of August 2019—ExxonMobil, Chevron, Shell, BP, and Total S.A.—are increasingly conservative in capital infrastructure spend (see Figure 1).

As the capital spend of Silicon Valley companies continues to grow exponentially, these companies are seeking data-driven Best Practices on how to deliver massive infrastructure projects quickly and successfully – a question the giant firms in other industries, such as oil and gas, have been studying for decades. 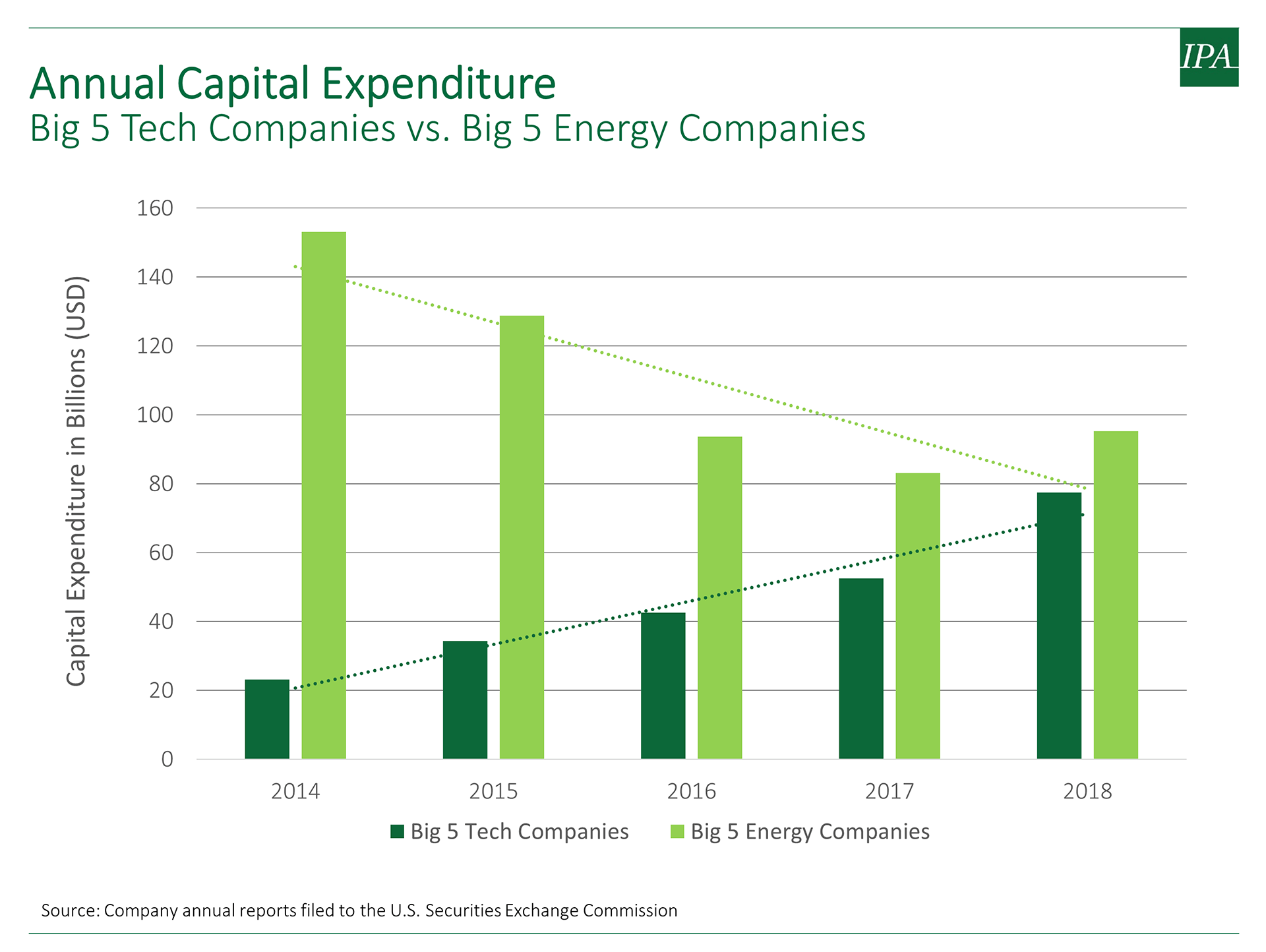 Figure 1: While the total annual capital spend of the top five listed energy companies is showing a slowdown, the Big 5 tech companies are increasingly starting to look like their industrial predecessors in their ability to spend significant capital.

To be disruptive means to challenge and change the way things are normally done. To follow a process means to follow a set of rules and standards to ensure consistency in approach and outcomes. Process in business is seen as the antithesis to disruption and often eschewed by Silicon Valley. The information technology sector in general prefers flexible product development methodologies such as agile strategies that enable the quick adaptation of new ideas.

Technology companies have a good reason to embrace agile-like development techniques to facilitate disruption: Being first to market with a new product or service represents a tremendous competitive edge. In fact, for Silicon Valley companies, being the first to commercialize an idea is fundamentally core business. Project leaders often do not have difficulty accessing more capital if needed to keep the schedule on track.

Tesla’s decision in June 2018 to build a new general assembly line for its Model 3 vehicle in a semi-permanent tent, located in an unused portion of the plant’s carpark, serves as an extreme example of how one technology company pushed the envelope to meet its product delivery promise. A more cost effective option might have been to debottleneck production at its existing facility. But for Tesla, the effect of not achieving its production targets on schedule would have been more damaging to stakeholders—including Wall Street investors. Tesla’s approach to expanding its facilities can be seen as a disruption to traditional construction in the form of alternative scope selection; schedule was prioritized not just above cost, but also above long term operability of the assembly site. For well-known global automakers (Volkswagen Group, General Motors, Toyota, etc.), such an unorthodox and costly capital expenditure to ramp up production would not be justifiable under almost any normal business case scenario. The reputational risk alone would be too great. In contrast, Tesla’s decision to build the semi-permanent facility for the additional assembly line is seen as a sign of thinking outside the box (although Tesla has faced its share of scrutiny on vehicle assembly practices and quality).

Infrastructure projects are fundamentally different than software product development projects, primarily because the project’s end-product is literally set in steel and concrete. The ability to influence the outcome of an infrastructure project diminishes with time, while the cost of late changes grows exponentially. Unlike software, steel and concrete cannot be changed by remote updates following completion. Construction has therefore not been disrupted. Silicon Valley’s success in delivering infrastructure projects does not depend on its ability to disrupt construction, but rather on its ability to temper its disregard for process and take stock of the lessons learned by traditional industry over decades of good and bad projects.

Construction for Disruption: What Silicon Valley Can Learn From Established Project Systems

IPA has evaluated more than 20,000 capital projects executed around the world by more than 500 different owner companies. Most of the capital projects were built by Fortune 500 companies, including global industry leaders in the energy, chemicals, refining, and pharmaceuticals sectors. IPA has also evaluated major infrastructure projects, including several publicly and privately funded mass transportation and airport projects. Our mission is to help companies achieve excellence in capital project delivery. Leveraging our proprietary capital projects database with detailed cost, schedule, and performance data collected over the past 30 years, we have identified a set of project practices that have strong statistical links to better outcomes, and developed benchmarks to measure competitiveness. Below we share a few key concepts that are relevant for Silicon Valley.

Clear objectives are critical for project speed. Clear objectives form the foundation of every successful project. However, even in established industries, too many projects are initiated with unclear objectives. Project trade-offs among cost, schedule, operability, safety, and other performance factors tend to get insufficient business sponsor input or scrutiny. The consequence of unclear objectives, as shown in Figure 2, is project value loss. In contrast, when projects are guided by crisp, quantitative objectives and trade-offs, they are usually successful in delivering the promised outcomes. When speed is the objective, it is imperative to articulate how other desired outcomes—cost, local content, future expandability, quality, or other project attributes—can be traded off to achieve speed in schedule. 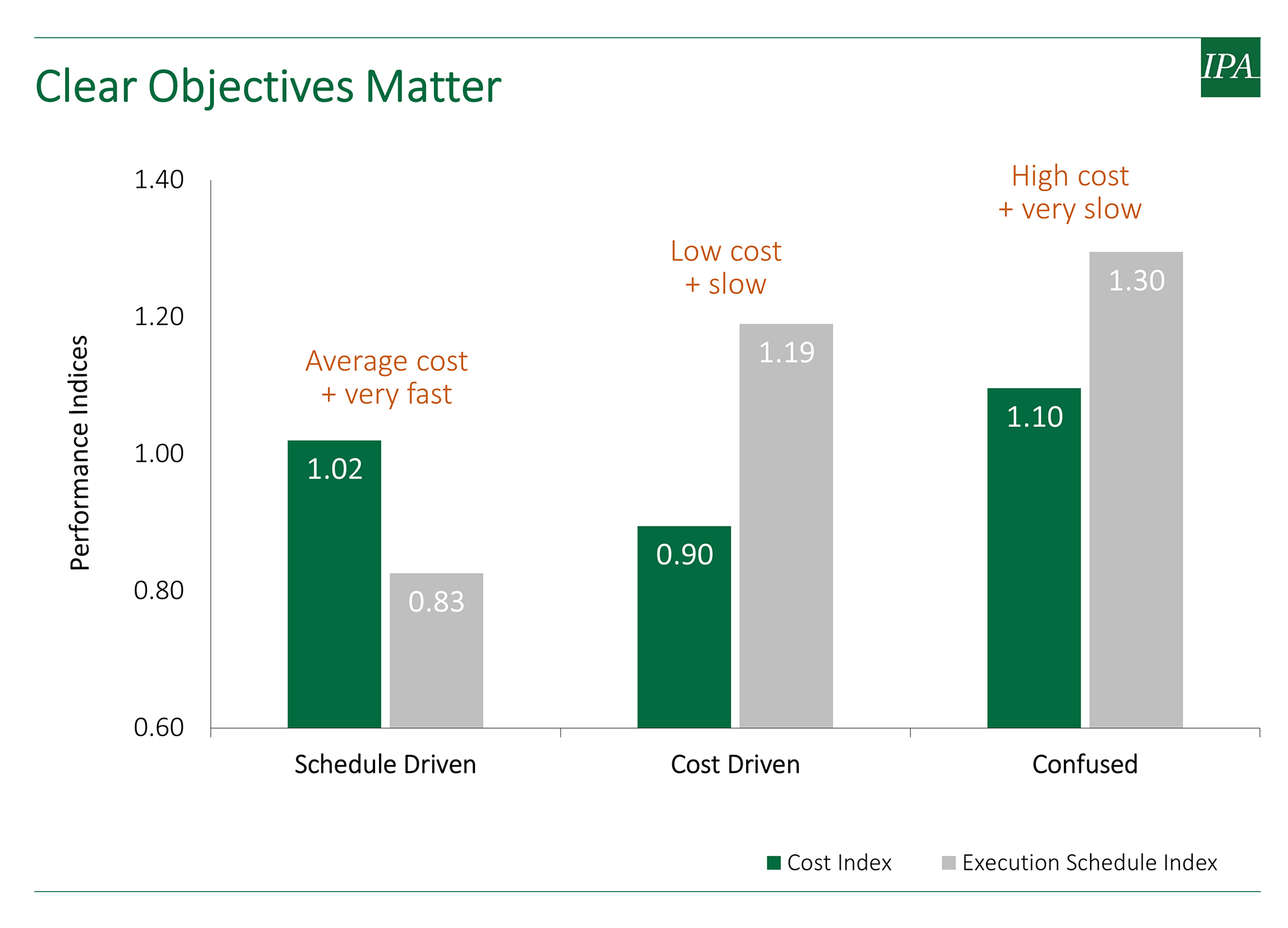 Form a strong cross functional team as early as possible. IPA’s interactions with Silicon Valley companies show that some operate in a highly silo-ed environment, where projects are passed from department to department over their lifecycle and no one group has ownership of asset development. Decades of project experience in other industries has shown that this strategy is not conducive to success. In fact, no single project practice is more leveraging than the formation of an integrated owner’s project team, with participation from key project and business functions that is consistent throughout the project lifecycle. Strong teams are especially important for companies that have little to no structured project work processes, as is common for Silicon Valley.

A project work process is for the benefit of the business. While clear objectives and a good team can go a long way toward setting a project up for a success, they can’t fully replace the advantages of a good project development process. Too many companies believe a work process is something for the engineering or project group, when in fact it is a framework to allow the business to make good decisions about risk/reward trade-offs.

Even though many Silicon Valley companies prioritize speed over cost in their project developments, no company CFO wants to risk a major cost blowout on a significant project. Executives want confidence that they can announce promises on schedule, cost, and functionality to customers, employees, and shareholders without too much risk of missing those targets and damaging market share and reputation. A project work process with clear criteria for deliverables and gates for investment decision making allows the business to understand the likelihood of meeting cost and schedule targets, and adjust accordingly.

The established method of project development in traditional industries is known as Front-End Loading (FEL), whereby planning and design is undertaken early in a project cycle (i.e., the front-end), maximizing the information development and decision making that is of the highest influence, and also the lowest cost. FEL is normally used in conjunction with a stage-gated process, which involves developing project information in a logical sequence in stages, each separated by a decision gate. A good stage-gate process includes gates that take place when just enough information is available to make a sound decision about whether to proceed to the next set of activities. IPA’s research on decades of good and bad projects executed by establishment industry players shows that a good work process reduces risk without significant additional investment and without compromising project speed. As shown in Figure 3 below, the level of project planning is strongly correlated with project contingency. This type of relationship allows companies to clearly calculate the cost risk they face if they execute a project with little upfront planning work. In some cases, the business may be willing to assume 40 percent contingency. In other cases, these data may offer the needed push to further define the project scope before proceeding. 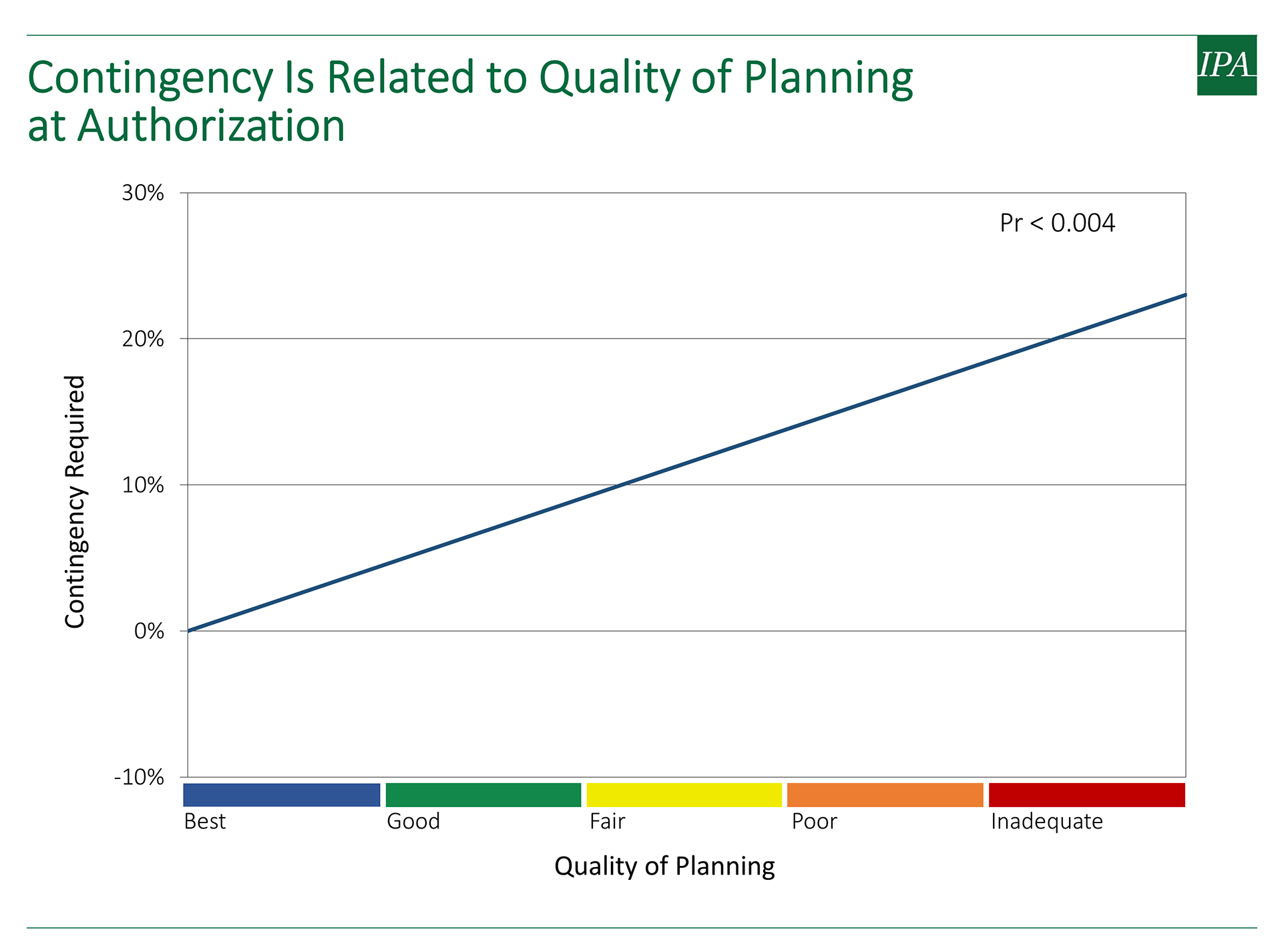 Project success—or failure—can be predicted with a high degree of accuracy. Silicon Valley companies are known for their incredible data analytics when it comes to product and customer management—yet IPA’s discussions with several companies has revealed that they are in the infancy of efforts to capture and correlate their own project data. The most sophisticated companies we work with in other industries have robust internal databases to support the development of new projects, which are routinely tested against IPA external benchmarks and Best Practices. Silicon Valley companies don’t need to wait until they have a set of project successes (or failures) under their belts to start understanding which practices are most leveraging—they can leapfrog that process by understanding what has already been tried and tested in other industries.

Silicon Valley companies may never completely embrace rigorous project processes—it is not a part of their core culture. But IPA, the pre-eminent consultancy in capital project systems, has proven that some of the most leveraging aspects of capital projects Best Practices are universally applicable—namely clear objectives, strong teams, and a consistent framework for investment decision-making. As Silicon Valley’s tech companies continue to grow their capital projects portfolio, and develop the organizations charged with delivering these projects, now is the best time to take a data-based approach toward ensuring success.

For more information on how IPA can help Silicon Valley successfully deliver infrastructure projects, please complete the form below.