With increasing investment and strong competition in renewable energy projects, getting predictable and competitive capital and operational costs becomes imperative to long-term success. Working with these projects, IPA has observed a consistent gap in assigning operations representation to projects during the project development and execution phases. With this gap in the project team, we observed consistent shortcomings during the life of the project, particularly during commissioning, startup, and early operations—and ultimately in the overall success of these ventures.

Operations representatives provide critical input for selecting the right project scope, completing engineering and procurement, planning for construction, managing design changes, and of course commissioning and operating the completed asset. Relative to other industries, we find that the renewable sector (e.g., solar and wind farms) struggles to include owner operations representation much before the facility is started up. This is probably because including operations input early in the project is not necessarily intuitive at first, particularly because many of these projects are greenfield, meaning they lack existing operational staff. The low margin nature of renewables also makes it difficult to justify having owner operations on staff. However, because of their low margin nature, and their low tolerance for cost and schedule deviations dictated by agreements, any information that comes in late to the project is problematic. We observe that when operations comes on board late, misalignment between that function and the project team is a common root cause of changes and problems during commissioning and starting up large solar and wind farm assets.

Operations Representation Is a Critical Part of an Integrated Team

Not surprisingly, project outcomes are considerably worse when operations representatives are not integrated into project teams during the planning and execution phases that precede commissioning and startup. In particular, integration of owner operations representatives into project teams—or lack thereof—has a direct influence on project startup and operability results, which heavily determines overall business success. IPA’s research shows that large projects (e.g., capital investments over $20 million) average 10 percent less production versus nameplate when a key function like operations is missing from the project team. 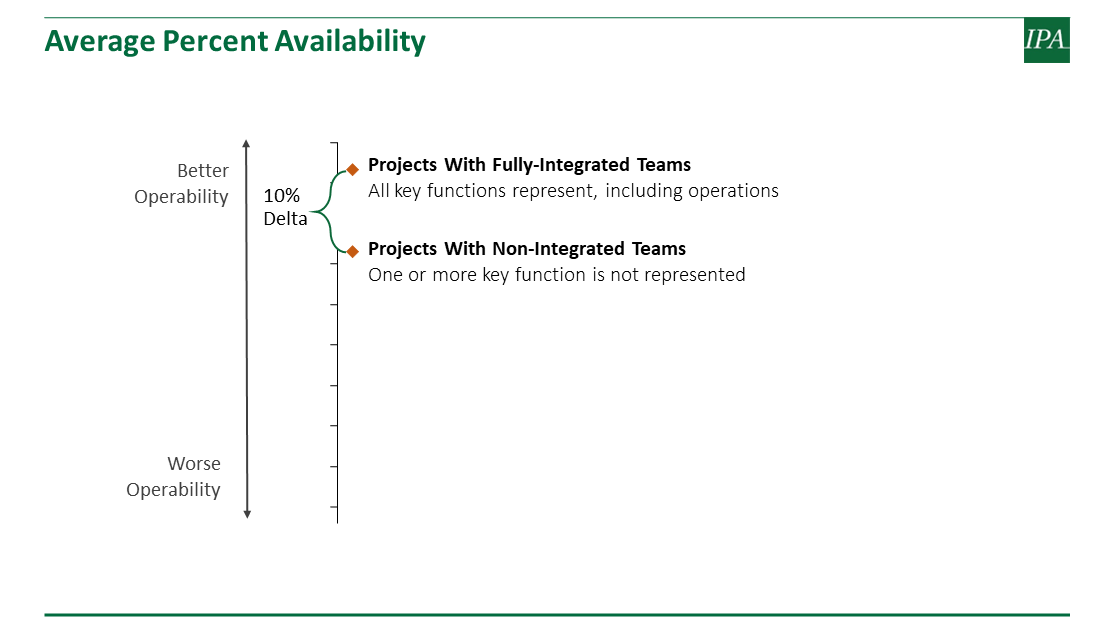 Operability results play a large role in net present value (NPV) and rates of return (ROR) on capital investment—poor or delayed startup and operability shortfalls can more than offset good cost and schedule performance. Because of this relationship with final business results, integration of operations representatives is a key leading indicator (KLI) of project success.

The Importance of Operations in the Planning Phases

The value owner operations input provides is clear during both the planning (pre-authorization) phase and the execution phase. At the beginning of the planning phase, operations ensures that the project team has early alignment on how to prioritize and trade off operating expenditure (OPEX) goals against capital expenditure (CAPEX) goals. Operations can also provide critical input around realistic operational performance—a common reason why renewables projects miss their operational targets. Understanding trade-offs and setting realistic targets are two critical factors in developing a clear and viable business strategy.

Owner operations’ input is also critical to better understand the long-term value (and cost) of various scope elements—and therefore what to include and what to exclude from the project scope. Consequently, we find that projects with early operations input have improved efficacy and timeliness of project scope selection and average fewer scope additions, fewer scope deletions, and fewer design alterations during the execution phase of the project.

Better understanding the operational aspects of the economics and the value of each scope element places the owner organization in the best position to negotiate with equipment suppliers and design and installation contractors. With operations representatives, project teams have a better understanding of what to prioritize in contract terms and conditions, such as whether to include or exclude maintenance support from equipment original manufacturers (OEMs).

There are also several benefits of having owner operations integrated into the project team during the detailed engineering, procurement, and early construction phases. While operations’ participation during the planning phase leads to fewer changes, the changes that do occur are also handled better. Operations provides a necessary layer of quality control from an operability and maintainability perspective, ensuring that changes fit the project scope and the operational objectives of the project. We see project teams with operations representation employ better change management and control practices, and make faster and better decisions around proposed changes. We also see the changes better incorporated into later phases of the project, in particular with respect to commissioning and startup activities.

Last but not least, operations’ most obvious role is during the commissioning, startup, and handover phases. A common misconception is that they are only needed for the duration of these phases. However, to succeed we find that operations needs to get involved much earlier, and be given enough time and involvement to develop adequate plans. We have seen several projects with business cases severely tarnished by the lack of well-developed startup plans, inadequate or unqualified startup resources, unidentified stakeholders during startup, and misalignment with connecting carriers. These gaps typically lead to significant production delays after mechanical completion or long-term production shortfalls. We frequently find that the cause of these gaps could have been identified early on and completely avoided with timely involvement of operations.

Our data clearly show that early involvement of operations representatives is critical to the success of renewable energy ventures. We recognize that it can be a challenge to integrate the operations function early on due to staffing constraints, organizational design, or work process gaps. IPA has successfully worked with several clients to devise bespoke solutions to overcome these challenges. The reality is that project and business results are more predictable and more competitive when owner operations representatives are integrated into the project team in all project phases.

Business leaders in the renewable sector routinely work with IPA to evaluate the status of their project staffing (e.g., FTEs and/or headcount) and organizational design, and to improve their project work processes to ensure that operations representatives are adequately involved. IPA has been the global leader in driving improvements for capital projects since 1987. IPA’s capital project database has detailed data from more than 22,000 projects located worldwide from all industrial sectors and of all sizes and levels of complexity. IPA leverages 35+ years of experience and its world-leading project database to provide research and consulting solutions customized for each client. IPA provides research and consulting solutions that help business leaders and their project organizations to better integrate their owner operation representatives onto project team during all major phases of the project lifecycle.