Should capital projects organizations slow down digitalization programs as a result of the COVID-19 pandemic and economic crisis?

The answer to this question depends on the measurable benefits. Digitalization has been the buzz word in projects for the last couple of years, with many owners taking a serious look at the way they manage and leverage information in the facility design-build-operate life-cycle. The promise of finally leveraging insights from the terabytes of data produced on our projects through streamlined interfaces is simply too good to pass up.

In January of this year, IPA conducted a poll of owners to see what digitalization projects the industry had underway. Over 25 different owners participated, and the results were as varied as the companies we polled. Some projects were focused on engineering efficiency; some focused on project controls; for others it was operations. The one thing they all had in common was that for most companies these projects were still working to define what value could be created and how digitalization success should be defined.

Despite only being six months removed from the initial survey, we followed up with these companies to see what the COVID-19 pandemic’s affect was on their 2020 digitalization projects.

Thirty industry-leading clients took the time to answer our questions on the impact COVID-19 and the economic crisis have had on their 2020 digitalization plans for capital project execution. Most of the companies who responded (97 percent) had planned 2020 improvements already underway in multiple functionality areas. Some companies had as many as 10 to 12 areas of targeted improvements in their digitalization plan (Figure 1).

Within the total 185 improvement efforts reported as being worked on, we see a wide distribution of improvement focus areas. The surveyed companies are basically working across the whole project and facility life cycle (Figure 2). It is also interesting to note that no single area dominates—work focus is evenly spread. 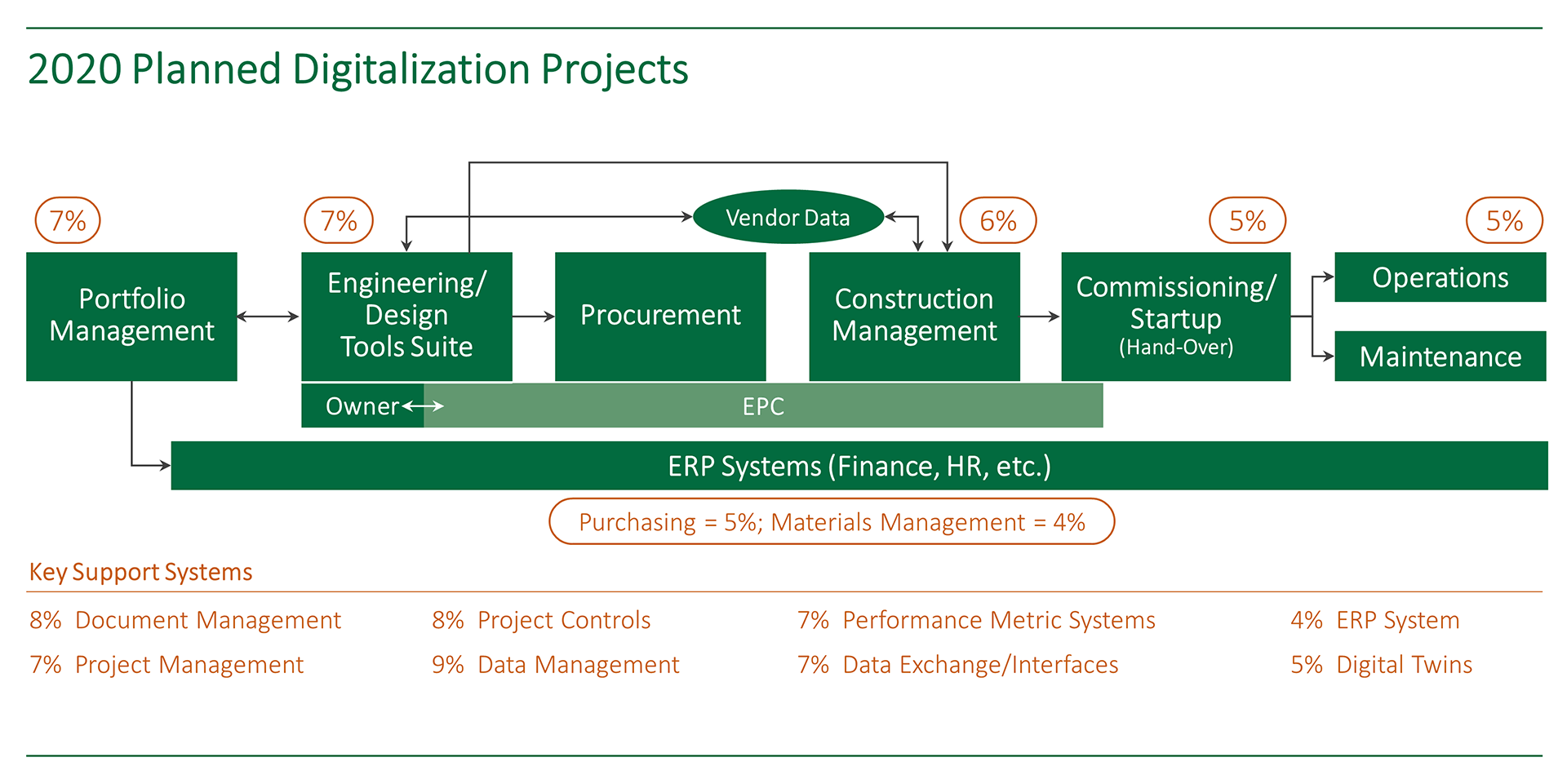 So—to answer the survey question—what impact has the COVID-19 pandemic and economic crisis had on our digitalization plans? Answer: Some impact has been felt. Eleven companies (37 percent) said that their 2020 plans had changed. Eight companies slowed down some aspects of their plans, although two of these companies also accelerated efforts in some of their improvement areas related to improving connectivity, and one stopped work on their construction management improvement area. Two added new focus areas to their plans—primarily efforts to help deal with COVID restrictions and information access in the field. Many identified a shift in relative priorities and reported that project plans remain fluid at this time.

The primary explanation is that we’re failing in the same predictable patterns. We do not complete the front-end as well as we know we should (sometimes we do, but not systematically). As a result, engineering gets out of sequence trying to catch up, and is ultimately delayed. This causes slip in our material delivery. And ultimately, our construction contractors, who are ready and willing to work, are left waiting on materials and designs.

These results should not be a surprise. We do projects the same way we have been doing them since the 80s. Pandemic or no pandemic, digital opportunities exist today that can help make a lasting change in our projects. A few companies have already measured it, and it is big. So, going back to our question at the beginning, should we be delaying our digital projects? Well, if the project involves creating greater transparency in the maturity of the front-end so that we really know when things are done, then no. If the project involves facilitating the handover between FEED contractors and the engineering contractors, then no. If the project involves creating transparency and seamless transition between engineering, the vendors, and the field and is targeted at improving labor productivity, then no.

Value delivery is obtainable when we make improvements in construction and engineering productivity or accelerate the schedules on our high return projects. The good news is that no companies abandoned their digitalization efforts. As companies continue to look for the improvements needed to improve capital project performance, IPA is here to support those efforts. For more information on how IPA is helping our clients develop a value based digitalization strategy and maximize the value of their digitalization efforts, please don’t hesitate to contact us.

IPA continued this discussion in a live webinar held in August 2020, Moving Forward With Digitalization in the Time of COVID-19 and Economic Crisis. The webinar also shared an update on the collaborations among industry associations and standards organizations working to enable more efficient business value development and delivery across the facility life cycle. Participants were given the opportunity to provide input on the relative value of the standard business use cases being developed and piloted by MIMOSA (a standards developing organization) in cooperation with other industry associations that develop Best Practices, such as CII.