The poor predictability of execution schedules for Middle East projects is driven by several factors, many of which project sponsors can control, new IPA research finds. Building on past research, IPA has expanded its understanding of the struggles owner companies in the region have with meeting schedule targets compared to similar projects located globally. Using actual project data and empirical information, IPA’s latest work on the topic of Middle East project schedule predictability identifies an array of drivers linked to slow schedules and schedule slip.

The new research backs up previous findings reported by IPA in September 2020. That article reports that Middle East projects have slipped their planned schedules steadily by 30 percent since 2010. This is well above what is experienced by projects around the rest of the world, where median slip is just under 20 percent. IPA’s latest assessment of 29 completed regional projects, ranging in value from $10 million to $500 million and authorized after 2011, finds that Middle East projects both take longer and experience significantly higher schedule slip compared to similar global projects. IPA’s new research goes further than past research, however, in determining factors that owners should consider to set realistic completion targets.

Importantly, the study, led by IPA project analyst Daoud Kiomjian, categorizes the drivers of schedule duration in the Middle East into three distinct groups: (1) factors that are entirely under a project team’s control; (2) organizational factors or practices; and (3) ambient or uncontrollable factors. What follows is a look at just a few of the factors for each category. 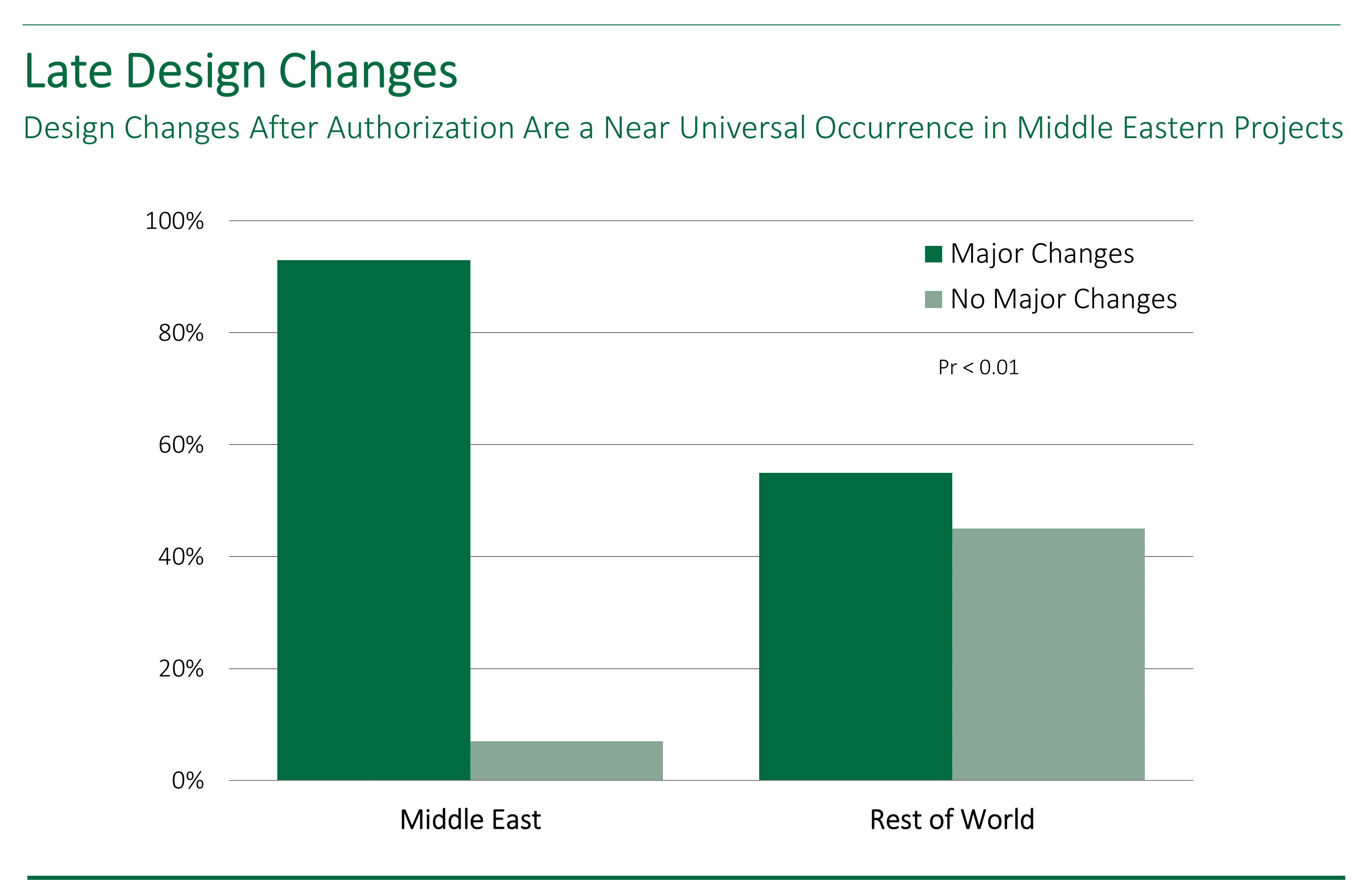 Lagging team integration is particularly problematic for Middle East projects where early owner construction representative input in the planning stages could add a dose of realism to overly optimistic schedule forecasts. Middle East project teams are not integrated or lack key input in the early planning stages more frequently than in the rest of the world. Companies that lack construction competency should aim to develop it, the data suggest, because construction input ensures more realistic construction schedule target setting. The striking difference in team integration between the Middle East and the Rest of the World is shown in the figure below. Unlike the rest of the world, which has integrated teams on more than half of its projects, projects teams in the Middle East are twice as likely to be non-integrated than integrated.

Other factors that interfere with setting achievable execution schedule targets are more difficult for project teams to control and are symptomatic of owner project systems—or organizational practices. IPA research uncovered a few such factors including, principally, systematic team turnover. Middle East project teams experience higher turnover of project managers and other key team members compared to projects elsewhere in the world, according to IPA data. The systematic turnover of project teams when projects progress from one phase to another occurs more frequently in the Middle East and can undermine team stability. Previous IPA research indicates that project team stability is a major driver of project outcomes, including schedule competitiveness. A lack of recognition of how disruptive turnover is to execution schedules drives optimistic forecasts, particularly in organizations where turnover in key positions is a planned event, for example, between the FEED and execution stages. This, in turn, makes schedule slip more likely.

The final grouping of factors includes ones that cannot be changed and simply have to be planned for in setting schedule targets. Examples include the extensive use of large bodies of unskilled labor and the heat and humidity during much of the year for Saudi Arabia and other Gulf Cooperation Council countries. Our data indicate that adverse weather conditions can reduce labor productivity by more than 20 percent.

Both unskilled labor and extremes of heat and humidity are not unique to the Middle East. What is unique is that neither factor is specifically considered when setting schedules. The effect of both of these factors on field productivity is rarely specifically acknowledged as a driver of longer execution durations. A specific example of this is the rarity with which resource loading curves are adapted to the sizeable (and observable) productivity decline experienced in the summer months in the Middle East. According to IPA project analyst David Kiomjian, “the immediate response to the productivity decline is not to plan for it, but to bring in more workers, which adds to the congestion at the site.”

An Approach to Improve Schedule Predictability for Middle East Projects

Applying what we have learned to date, categorically there are two important ways to improve schedule predictability for projects in the Middle East. The first is to re-connect target setting with the project environment (set a realistic estimate) and the second is to address gaps in team integration and turnover (deliver on the estimate). With the right data, quantifying location factors, such as weather and local labor productivity, to apply to schedule benchmarking tools is fairly straightforward. However, the more difficult task before Middle East owner companies is aligning schedule targets with key functional input and buy-in at early planning stages. This requires a concerted effort to ensure the project sponsor and the project team are aligned on scope and project completion date by the end of FEL 2 at the latest.  t is then necessary to maintain that alignment throughout project execution, and through any turnover of project team members, planned or otherwise.

Contact IPA to learn about other factors identified in this study to improve schedule predictability in the Middle East and how IPA helps owner companies with early target setting, team alignment, and minimizing change.