What Is Standing in the Way of Schedule Improvement?

Capital projects in the Middle East have struggled to set realistic, or achievable, execution schedule targets for years. Independent Project Analysis (IPA) has continually proven, through its research on projects globally and in the Middle East, that project systems with strong schedule estimating capabilities can set predictable schedules and avoid the execution schedule slip that erodes a project’s capital effectiveness and undermines portfolio planning. However, the uncomfortable truth is that the region’s oil and gas, refining, and chemicals projects have not succeeded at incorporating real project performance metrics and execution schedule estimating Best Practices into their project development and delivery systems and continue to experience schedule slip at levels well above the global average.

According to IPA Project Analyst Daoud Kiomjian, projects located in the Middle East have experienced a median execution slip of more than 30 percent since 2010. Projects across the rest of the world within the same size range have experienced markedly less execution schedule slip over the past 10 years.[1] Remarkably, median execution schedule slip in the Middle East has remained amazingly constant since it first degraded in 2012. This consistency in median schedule slip is observed despite great variance in market conditions for capital projects over the same period of time. All of this leads us to ask the question: How many years of disappointing schedule predictability have to pass before estimating practices are changed? 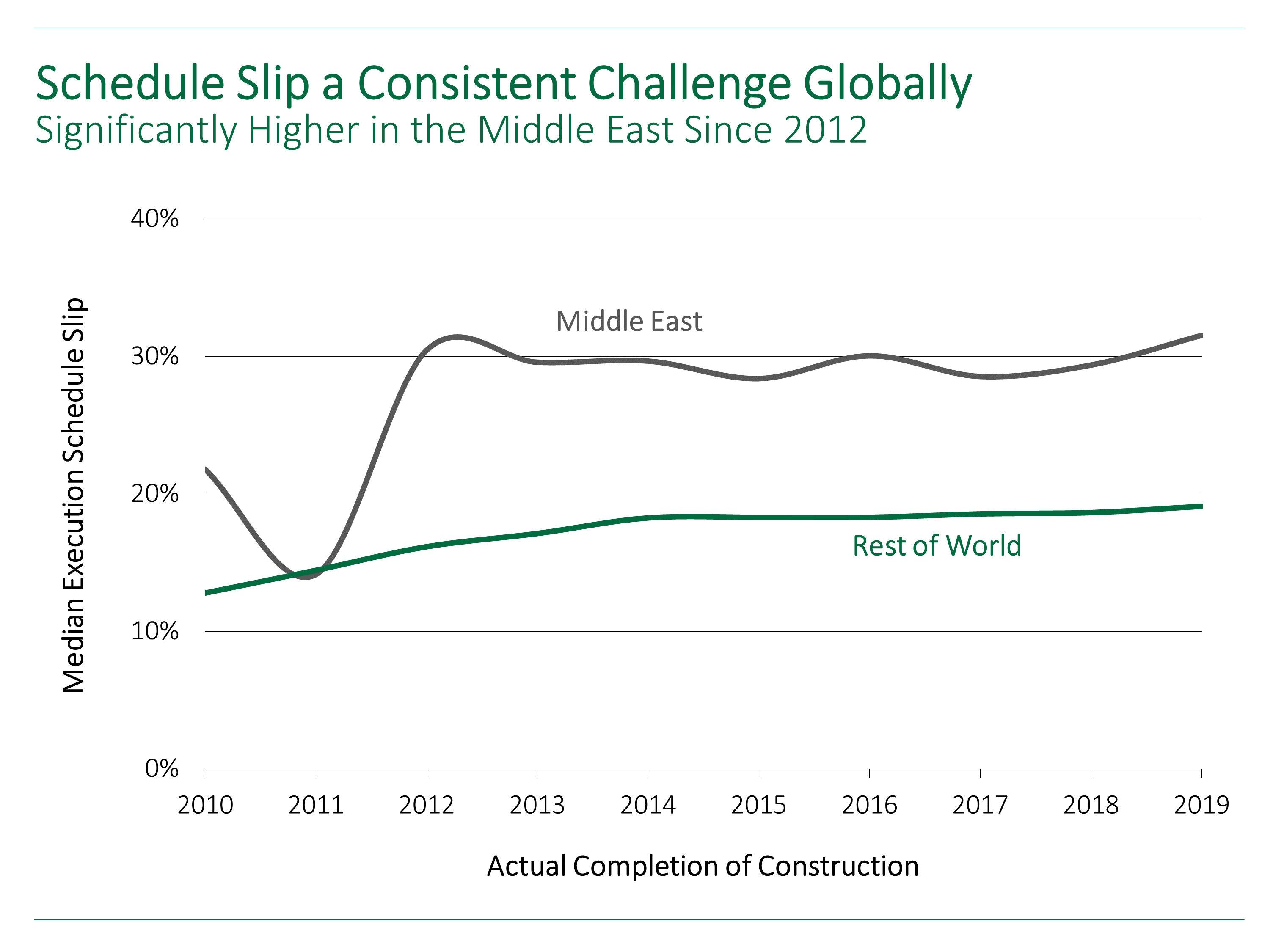 A few years ago, IPA reported on the problematic schedule predictability surrounding large Middle East capital projects. Familiar trends were observed. From 2005 to 2015 median execution schedule slip for Middle East projects increased from 6 percent to over 25 percent. At the time we discussed the primary cause: hot markets

Except for the disruption caused by the 2008 global financial crisis, the Middle East was often consumed by hot market conditions responsible for heavy demand for resources and strained supply chains. These hot market conditions caused owners to shorten construction schedules to get in front of increasingly escalating services costs and to capitalize on high commodity prices. These shorter construction schedules turned out to be aspirational and increasing slip in execution schedules was experienced.

Opportunities to improve the capital effectiveness of projects are increasingly important today given lower oil prices, increased attention to sustainability initiatives, and the overall uncertainty of current markets. The onset of the COVID-19 pandemic in 2020 has only complicated matters, and perhaps has heightened the urgency to improve project performance.

In the report we released in 2015, IPA Project Analyst Mark Etchells observed that owner companies should structure organizations and build teams with the ability to set “competitive and realistically achievable” schedules. “Target setting mechanisms need to be re-connected with the current project environment. They needed to be useful again in promoting incremental improvements in project performance over the long term,” Etchells said. In other words, companies that establish a structured target setting process and leverage real historical and current market data can strengthen their project estimation capabilities.

For owner companies in the Middle East, though, particularly nationally owned companies (NOCs), feeding actual project results data and lessons learned back into their own target setting practices has proven difficult. As Etchells commented recently for this article, acceptance of feedback into the planning process is vital. Past learnings, backed up with historical data, make for more productive discussions between business and project managers, regardless of personnel turnover. “The project team can say, ‘We’ve never done this type of project in just 8 months.’ Fine,” Etchells said. “Business has its objectives, but cost engineering pushback on schedules gets everyone thinking about how realistic a project’s schedule expectations are.”

However, project organizations in the Middle East are struggling to implement corrective actions that can drive system-level change. So why do owner organizations and teams delivering projects in the Middle East have such a hard time with schedule estimating? How might owner companies break through barriers that appear to stymie efforts to make more realistic execution duration targets? Are schedule target setting lessons not being implemented or are they not being implemented effectively?

Create a Schedule Database: Key to learning from the past is having structured data capture and storage mechanisms in place to enable project planning advances. Too often, IPA has found that project teams encounter a difficult time collecting the owner’s own project scheduling metrics, either because it was not captured or because the data is not easily accessible. Using quality data throughout the schedule estimating process results in accurate and competitive estimates and provides a baseline for project controls.

Strengthen Project Closeout Feedback Procedures: As mentioned above, IPA observes that Middle East-based project organizations often fail to capture lessons during closeouts. More troublesome is the lack of an effective channel to sow the seeds of change, particularly with respect to execution schedule estimating. The causes of schedule slip need to be identified and documented during project closeout assessments and then relayed back to the proper stakeholders.

A few reoccurring barriers or missteps undermine the effectiveness of closeout feedback procedures. At times, the wrong project functions or staff with less clout within the organization learn of unexpected events and misjudgments that, if better understood, could improve schedule estimating. Another barrier is the failure to conduct a true root cause analysis of schedule setting weaknesses. Rather than uncovering the underlying causes of scheduling faults, judgements are passed and blame is assigned to the first scheduling performance fault identified.

Reach Alignment between Business and Project Functions to Lay the Foundation for a Realistic Schedule Target: Lessons and historical data can be powerful resources when they are brought to the table at Business Engineering and Alignment Meetings (BEAMs), also known to some companies as Classes of Facility Quality workshops. Unfortunately, BEAMs are not part of many Middle East capital project delivery systems.

Getting business and engineering group representatives to meet to discuss a project’s constraints and boundary conditions can drive more accurate schedule estimates, and ultimately improved schedule performance. IPA research found that projects that conduct a BEAM on average experience 10 percent less schedule slip compared to when a BEAM is not used for project development purposes. A project sponsor’s engineering group needs a forum to push back on expectations if a project cannot be developed, executed, operated, and maintained within the execution duration conditions articulated by business. Therefore, business representation during a BEAM workshop is crucial.

IPA is conducting its own research to understand the persistent barriers to more realistic schedule estimates in the Middle East. Using real historical data from IPA’s capital projects database, IPA has begun an in-depth analysis of the practices that inhibit project teams from generating more accurate estimates. To learn more about the research, please submit the Get More Details form below.

[1] Slips metrics provided for projects ranging from US$10 million to US$500 million in terms of size, or CAPEX.