As the COVID-19 pandemic first started to take hold in early 2020, IPA started collecting data to record its effect on capital projects and the companies that do them. IPA sent out its first survey in March 2020 and has since issued seven more, with the latest in September 2021. These surveys track four areas of response to the pandemic: effects on internal project system operations, supply chain disruptions, portfolio implications, and mitigation strategies. More than 60 companies from all industrial sectors including E&P, chemicals, power, and pharma responded to the most recent survey, which collected data from hundreds of project professionals.

However, although the perception of productivity at home has improved, those working both from home (WFH) and those working from the office (WFO) report spending more time in meetings than they did pre-COVID, with those WFH spending an average of 9 hours more per week in meetings versus 3.5 hours more per week for those WFO. It seems casual interactions in the office have been replaced by formal meetings in pandemic times—without causal conversations by the water cooler and in the hallways more structured interactions are needed.

Overall, the benefits of working from home—including more flexibility, no commute, and less travel—are counterbalanced by more meetings, a harder time striking a home/work balance, and longer hours.

Damage to project supply chains was one of the first manifestations of the pandemic. After the initial very high rate of respondents who reported experiencing vendor supply delays (more than 90 percent in our first survey) dropped down to a low of about 40 percent in Q4 2020, those delays began to steadily increase again and were reported as 64 percent in the latest survey. The percentage of delay followed the same pattern of starting high (at over 20 percent), decreasing to below 10 percent, and then steadily increasing back up to 18 percent, close to beginning of pandemic rates. 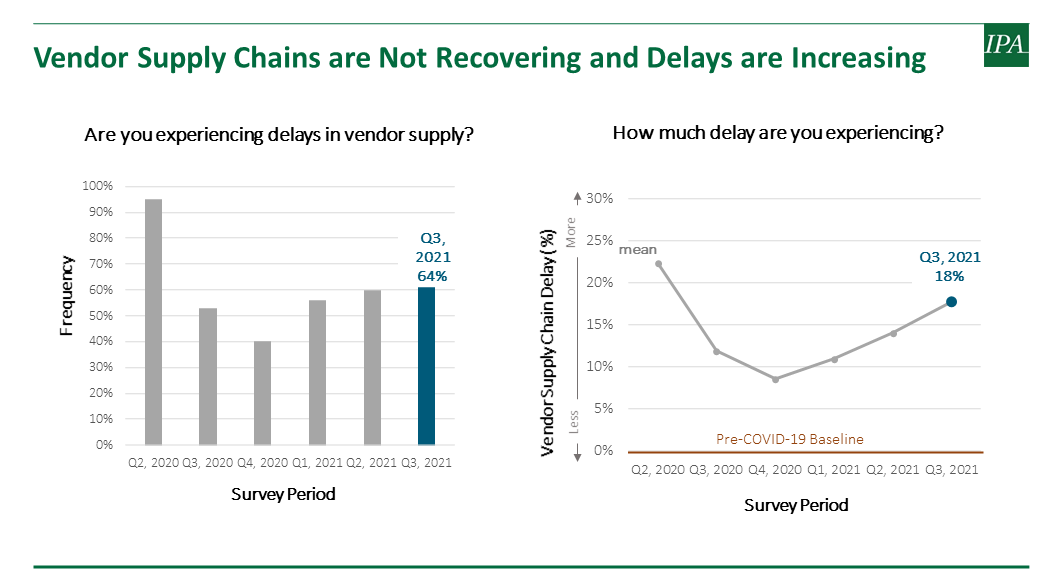 We found these supply chain delays span all sectors, with equipment delays the most frequently mentioned. In addition, these supply chain disruptions reveal a significant upward trend in all regions, with Asia and Europe the most affected. As one respondent reported, “[We are] experiencing delays from everywhere (US, Canada, Europe, Asia). It appears that no country is immune.” Another said, “Overseas shipping is horribly delayed. As a result, we have stopped sourcing from outside of the US.” 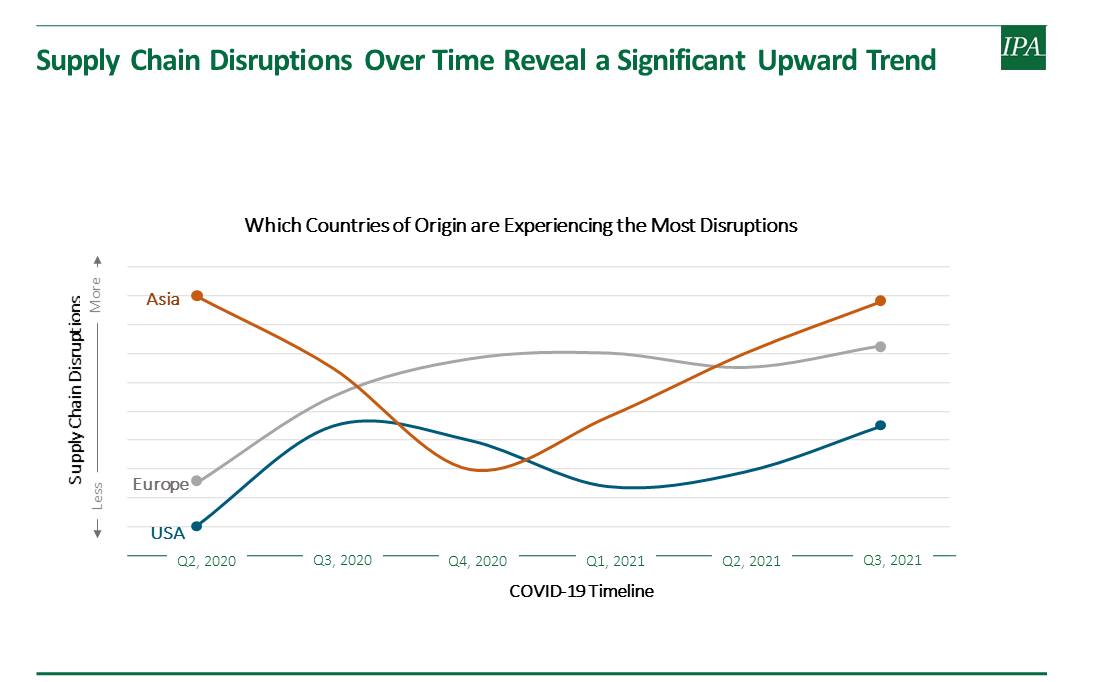 One contributor to the supply chain issues is logistics: half of owner companies cited logistics as the driver behind the supply chain issues. Of the respondents, 32 percent of owners reported difficulty getting freight on board for shipments out of China, 30 percent reported limited resources at ports (including labor to load the ships), and 28 percent reported limited vessel availability. The responses we received indicate the situation in China was much worse than was reported in the news, with respondents indicating they encountered widespread congestion and backups and major shutdowns of ports and airports due to quarantines of thousands of Chinese workers.

The majority of respondents have concerns about the effect of COVID-19 on the subcontractors or suppliers they have relied on in the past. Layoffs, consolidations, and bankruptcies are among the issues these subcontractors and suppliers are facing. However, only 18 percent of owners say that they have verified the financial and operational standing of the vendors they rely on in the last 90 days.

Engineering disruptions and delays are also on the rise again after coming down from their initial highs. In fact, not only are engineering disruptions increasingly frequent, but the percent of engineering delay has also risen to 8 percent, higher than just under 7 percent at the start of the pandemic and with no signs of abating. Although all sectors are showing at least some delay, respondents from the upstream sector cited over 15 percent delay in engineering, more than any other group, with MMM the closest at about 12 percent. 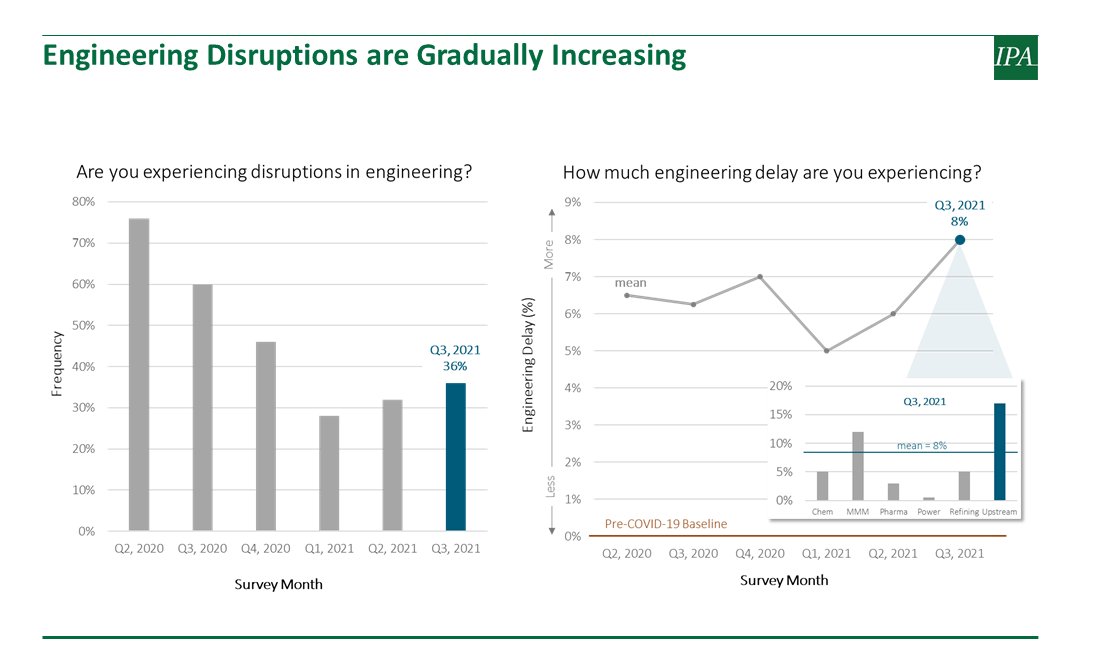 For the U.S. Gulf Coast (USGC) in particular, indirect costs have risen by 10 percent to cover various increases associated with logistics such as busses, food tents, and lodging. However, direct costs have not changed significantly, and skilled labor is readily available. General contractors working on the USGC report that welders and pipe-fitters are calling every day looking for work. In addition, productivity might be even better than pre-COVID because of a reduction in meetings at the site. Overall, although there is a lot of concern regarding inflation, owners can hold the line on wages because the labor is available and productivity is good.

Finally, although the current situation has not returned to pre-pandemic levels, companies are seeing the supply chain open back up as activity has largely resumed. As one survey taker noted, “Most areas are open although deliveries continue to be delayed.”

After putting projects on hold at the start of the pandemic, about a third of companies in our survey say they are planning a significant increase in the number of projects entering execution, led by the pharma and chemicals sectors. Although a sizeable number of companies are planning to ramp back up in the new year, this percentage is down from 6 months ago when almost half of the companies surveyed were planning to increase their activity. Another finding is that about a third are making strategic shifts in the types of projects their companies are planning, with new energy projects being one major new area of activity. Refining and upstream are the sectors leading this shift to a focus on renewables, sustainability, and low carbon.

As owners struggle to deal with the ongoing pandemic, their strategy can be best described as hope for the best, prepare for the worst. Owner strategies to mitigate supply chain disruptions include looking for alternate vendors, placing orders earlier than usual, requiring weekly updates from key vendors, and offering incentives for acceleration measures. Even as owners implement these measures, they should be prepared for the worst as procurement slip increases the likelihood of field growth and unpredictable projects.

Overall, we found that:

As we look to the future, the longevity of supply chain disruptions is the big unknown.  Supply chains have not rebounded as hoped and the situation in Asia is more dire than it first appeared.  Shortening and simplifying project supply chains should be a first order of business in 2022.

IPA will continue to survey our clients to gather real time feedback, and publishing relevant insights on our dedicated COVID-19 resource page.

Jason Walker is the Principal Deputy Director of Research at Independent Project Analysis (IPA).  Over his career Jason has led dozens of research studies, mostly in petroleum E&P. Before joining IPA, Jason worked for the Environmental Protection Agency and performed research for the National Aeronautics and Space Administration (NASA).