The COVID-19 global health crisis has shaken owner companies in nearly all capital projects industry sectors to the core, forcing them to reassess the future of individual projects and entire project portfolios. Owner companies deciding to press the pause button on projects to conserve cash flow may ultimately increase project expenditure in the long run. They now seek to understand the most effective practices for stopping and restarting capital projects without eroding business opportunities.

IPA has been reaching out to our clients, the global leaders in the energy, chemicals, refining, pharmaceuticals, consumer products, and other processing sectors, to understand how they are navigating their businesses and capital projects through these difficult times. Employee health and safety concerns, supply chain disruptions, and cash flow concerns have forced hundreds of projects to shut down. Meanwhile, many projects that have continued still face an uncertain future. “The most difficult element … is the uncertainty about restart possibilities,” IPA Capital Solutions Director Deb McNeil wrote back in March, just as many owners were beginning to respond to regional social distancing mandates.

According to a rolling survey IPA is conducting:

IPA recently reviewed 207 capital projects in its proprietary projects databases that were halted and restarted. The projects range in size from 2020US$17 million to 2020US$5.5 billion. The projects are representative of a diverse set of industrial sectors, including refining, chemicals, and mining. The median cost of the projects in the stopping and restarting project database is 2020US$80 million. Cost and schedule driven-projects are represented, as are greenfield and brownfield projects. Most projects are located in the United States, but Europe and Asia are also represented. The goal of the analysis was to measure effects of project stop and restart on project outcomes and identify practices that can drive cost effectiveness improvements.

Project stoppages are not without precedent. In the wake of the 2008 Global Financial Crisis, IPA observed a number of projects that stopped and restarted, with an average gap of 13 months. In more recent years, natural disasters, including hurricanes making landfall along the U.S. Gulf Coast and large wildfires across North America and Australia, forced owners to stop projects in their tracks and map out plans to get them going again. However, many project directors have never been in the difficult position of having to stop and restart a capital project while attempting to preserve its anticipated business value.

Before project leaders get too far ahead with their work stoppage and restart plans, they should be aware of the following, based on IPA’s findings from this dataset: 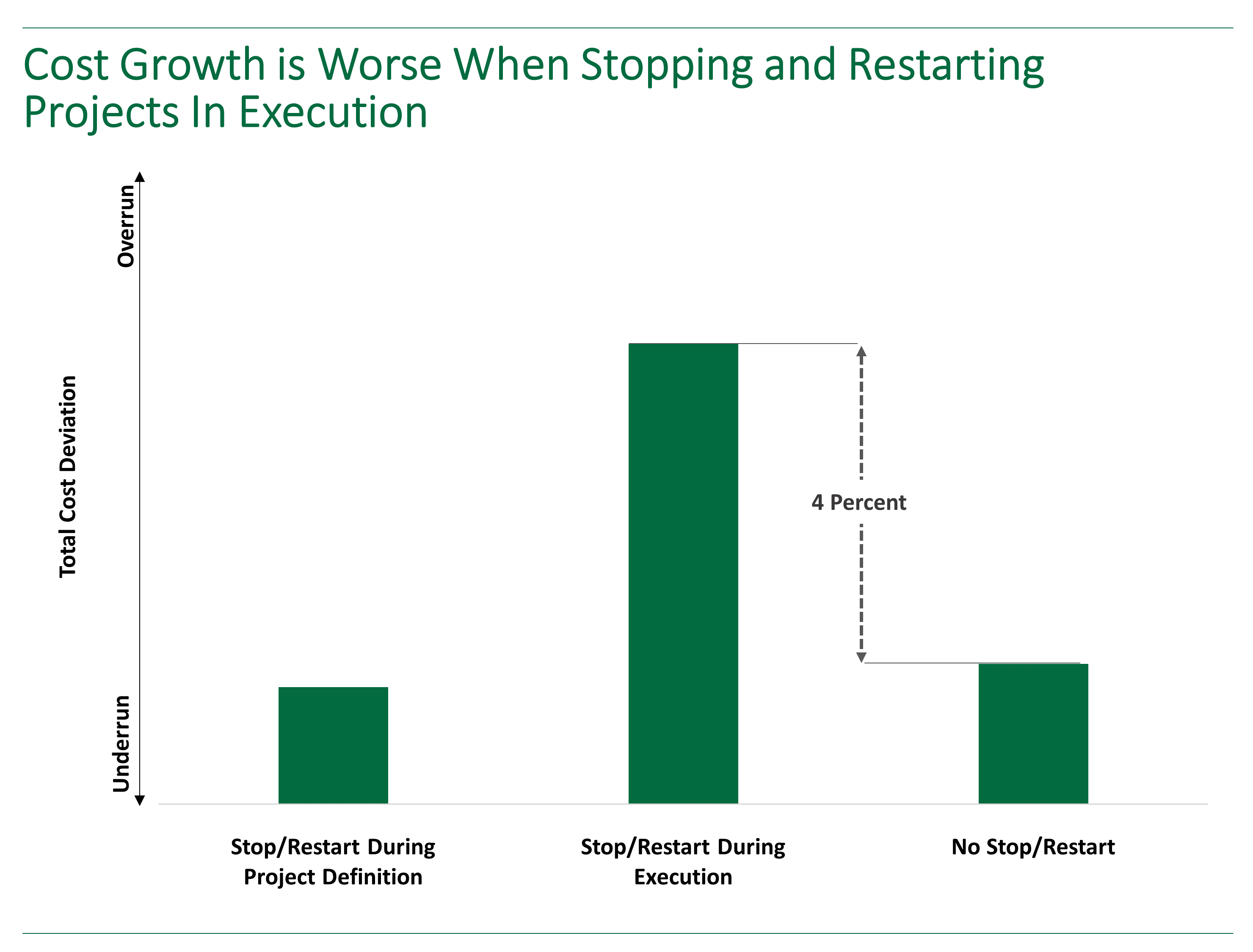 From these data, IPA can assist project and portfolio managers in:

IPA has already identified several learnings and Best Practices that owner project leaders can deploy to strengthen their own project stopping and restarting practices to drive cost effectiveness improvements. For example, best performers:

IPA has seen projects that have been stopped and restarted successfully. A few years ago, a $500 million production facility expansion project put on hold for 9 months in late engineering achieved an industry average cost outcome and good safety performance. During the project delay, several key functions were allowed to continue working on the project design. The downtime was used to conduct in-depth execution and Constructability Reviews. An optimized design resulted, which resulted in significant cost savings after the project resumed. The project received an engineering excellence award for this achievement. Unfortunately, such successful project outcomes are not the norm.

Clear advantages result from possessing reliable project data and guidance about the cost benefits and detriments to pausing projects at certain delivery phases and knowing which practices are proven to result in more successful outcomes.

We applied this research to help one company support its decision-making, as senior management was debating whether to halt or continue the company’s highest profile project. The company sought to answer several key questions:

We narrowed the dataset described above to align with the characteristics of the project in question, such as size and location and quantified the expected cost and schedule effects. We also tabulated pros and cons of stopping versus slowing down, and key Best Practices and watch-outs for each option. We can assist other companies faced with similar tough decisions.

IPA has been the global leader in driving capital effectiveness since 1987. Today, IPA’s capital projects databases contain detailed data from more than 20,000 projects located worldwide from all industrial sectors and of all sizes and levels of complexity. Just as we have done during numerous global and regional crisis events in the past, we will partner with our clients to help them successfully navigate through the coronavirus pandemic and help them implement lasting improvements.

Contact us to learn more about IPA’s stopping and restarting projects research and to find out how IPA can help project leaders increase the likelihood of preserving the value of capital investments seen before the COVID-19 pandemic changed the marketplace and the global economic landscape.