Mexico is re-emerging as the “go-to” country for improving project cost competitiveness while capital project cost trends strongly suggest that China’s reputation as an attractive, low-cost location to build new manufacturing capacity is losing its luster. Western manufacturing companies were once eager to take advantage of China’s low labor costs, competitive material prices, tax exemptions, and favorable exchange rate associated with developing and building projects, but these conditions are changing.

The economic uncertainties in China, including the real estate bubble and a stock market that has floundered all summer, mean that the prospect of “reshoring” manufacturing capacity in Mexico is gaining traction. Several U.S. companies have recently announced plans to expand operations in Mexico, including Caterpillar, Chrysler, Stanley, Black & Decker, and Callaway Golf—just as many U.S. firms moved their operations to Mexico in the 1980s and early 1990s.

IPA’s capital project cost data and research 1 show that the cost of doing projects in China is increasing. According to IPA’s database, projects in China were, on average, 19 percent cheaper than those on the U.S. Gulf Coast (USGC) in 2013. Yet, the cost savings was about 32 percent in 2005. IPA’s research suggests that the major driver of this change is increasing labor costs in China. In Mexico, project costs have been relatively constant at around 17 percent cheaper than the USGC.

A review of market conditions in both countries since 2001 offers some insights into why Mexico’s position as a global destination for investment is improving.

Since its entry into the World Trade Organization (WTO) in 2001, China’s industrial development and economic growth has been rapid. From 2003 to 2010, China’s GDP annual growth averaged 11 percent, according to the World Bank.2 Standards of living in China have steadily increased, and so too have wages. In fact, manufacturing wages in China have increased at a whopping average of 18 percent per year since 2002.

Meanwhile, the strengthening of the U.S. dollar to Chinese yuan exchange rate has hurt Western investments in China. The currency exchange rate, which held at around CNY8.3/US$1 until 2005, was CNY6.2/US$1 in July 2015. After conversion to U.S. dollars, China manufacturing wages in 2012 were over five times higher than they were in 2002. According to the U.S.-China Business Council,3 the minimum wage in Shanghai and seven other major Chinese cities increased 26 percent just from 2012 to 2014. China is, therefore, losing its competitiveness as a low-cost place for investing capital in new manufacturing capacity.

Recently completed IPA research shows that although construction labor wages in China are still much lower than on the USGC, they are increasing. The average all-in4 wage rate was about US$5.50/hr in 2009, but in 2014, the average was about US$7.20/hr. 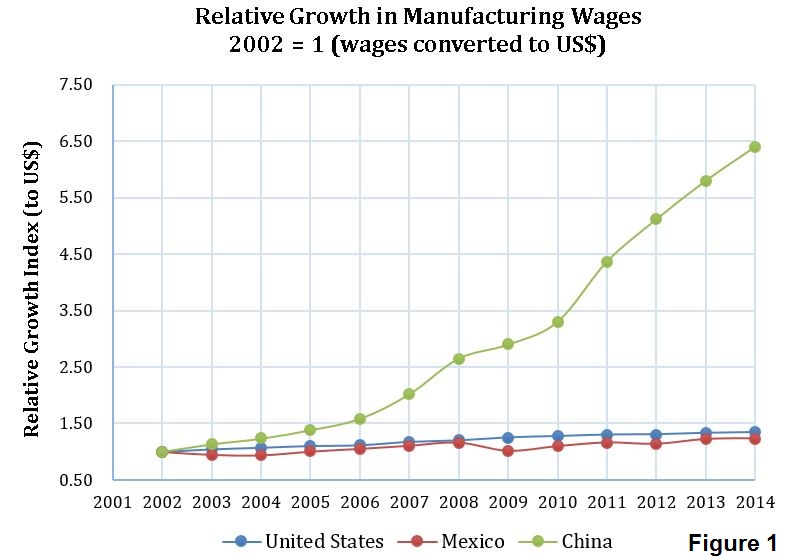 In contrast, Mexico’s wages have been relatively stable in the last decade (Figure 1). Current IPA data indicate that, until recently, the average all-in rate in Mexico was around US$12/hr. However, current exchange rate trends could result in lower wages in U.S. dollar terms if the Mexican peso continues to lose strength versus the U.S. dollar.

Wages in Mexico, meanwhile, have remained relatively stable. If these trends continue, the shrinking difference between the all-in wage rates in Mexico and China will make Mexico increasingly more competitive.

Another trend we have observed is a change in office costs for projects in China.

The increasing labor costs, and thus project costs, in China are being partially offset by a decrease in project management and engineering costs. Work that used to be performed by expatriates is more and more being performed by local professionals.

However, under the current Chinese economic scenario, these local engineering and project management costs are also following the wage increase trend in construction labor, which will likely make the China project cost upward trend even steeper.

Proximity drastically reduces logistics costs and the “time-to-market,” and also improves communications because of shared time zones with the United States.

Further, the North American Free Trade Agreement (NAFTA) allows for tariff-free trade between Mexico and the United States, making the process of getting products to the market faster and cheaper.

Energy and Other Issues

In addition, current (excess) shale gas production in the southern United States has the potential to be transported using existing infrastructure and processed in existing plants located in the states of Nuevo León or Monterrey.

Access to cheaper energy sources has a positive effect on projects developed in Mexico.

Indeed, the shale gas boom in the United States is helping to lower energy and raw materials costs in Mexico, resulting in a cost advantage over China.

Mexico’s industrial natural gas price is tied to the United States (which is exceptionally low).

China pays from 50 to 170 percent more for industrial natural gas than Mexico.7 This energy cost advantage is expected to improve further with Mexican energy reform, which will allow private developers to participate in oil and gas production. However, Mexico also faces corruption at a similar level to that in China,8 and security is a major concern.

Although originally concentrated in northern Mexico, drug cartels are spreading violence across the country, and Mexico’s current safety indicators are worse than those of most Organization for Economic Cooperation and Development (OECD)9 countries. These issues affect cost as additional security is needed for bigger projects in Mexico (e.g., pipelines and transmission lines). Similarly, corruption adds cost to capital projects.

Based on IPA’s recent research, it is reasonable to conclude that Mexico has strengthened its project cost competitiveness environment compared to China, which has seen its economy and markets change significantly since the turn of the century.

Given these trends, how many more companies will start looking to Mexico as a favorable place to do business? We have already noted that car manufacturers are already going back to Mexico. In addition, the new energy reform mentioned will likely change the E&P industry scenario in North America. The question for companies is whether this reshoring should aim at building new manufacturing capacity in the United States instead of Mexico.

Although proximity to shale is beneficial, there is competition with the United States as manufacturing capacity is already being built. We believe derivative chemicals and plastics are more likely to reshore, which will mark a shift from China.

IPA will continue to monitor these market trends.

5 From IPA research and experience in China, the consensus is that after 9 months in the market, technology is usually stolen.