The Open Industrial Interoperability Ecosystem (OIIE) Capital Project Working Group, a new working group co-led by Independent Project Analysis (IPA) and MIMOSA, aims to facilitate the interoperability of digital tools used to develop and execute industrial-sector capital projects. The working group kicked off via a webinar with more than 100 participants on November 4, 2020, with its leaders reviewing the capital projects industry’s uneven digitalization and standardization progress. Other industries, by contrast, have made significant strides in delivering compatible and user-friendly software and applications to gain work process efficiencies. The working group also seeks alignment on an approach for achieving digital interoperability and standardization from the beginning to the end of the capital project lifecycle. Working group participants—representing owner companies, EPC (engineering, procurement, and construction) firms, and international standards groups—are asked to lend their guidance and support to the ecosystem’s creation.

Owner companies’ project organizations have been pushing digital tools to “increase the volume, accuracy, and speed of information project teams need for key decision making,” IPA Capital Solutions Director Deb McNeil said during the working group’s first virtual meeting. However, whereas digital optimization is credited for making marked improvements to existing operating processes in other business sectors, capital project systems have not seen similar wide-scale opportunity gains. The global capital projects industry as a whole has not appreciably improved the cost and schedule competitiveness of projects for more than a decade (Figure 1). The industry has largely been unable to leverage digital tools to unlock efficiency gains that could result in better project cost and schedule performance. 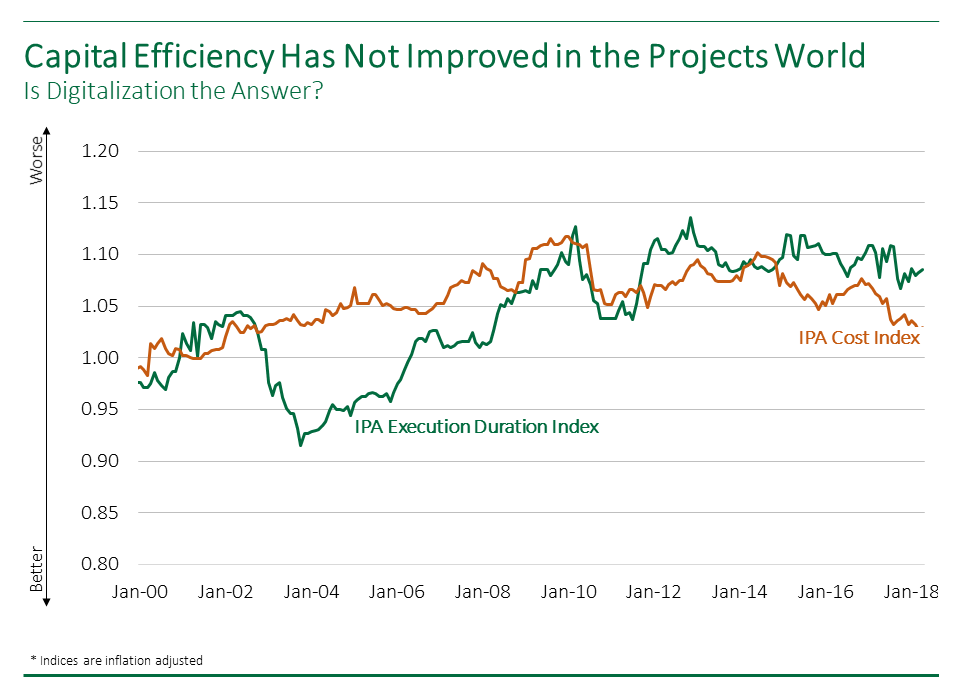 IPA-led owner company surveys have provided insights into what owners want from their digitalization investments and where project system development and implementation challenges lie today. Nearly half of the owners IPA has surveyed say they would benefit from having technologies that could enhance work progress visibility and information flow, McNeil said. Another 40 percent say information system upgrades might lower project costs or speed up construction. But owners struggle to deploy digitalization programs and projects.

As for many of the capital projects IPA has evaluated, clear business objectives are crucial to successful project outcomes. That is a challenge for owners in the digitalization space, McNeil said. Just 25 percent of owner companies surveyed had clearly defined digitalization objectives linked directly to business goals. IPA is working with multiple clients to clarify their digitalization strategies, objectives, business value cases, and goals.

Another challenge is the vast array of digitalization projects that owners are pursuing, ranging from building benchmarking databases, to implementing “digital twins,” to integrating engineering with construction management tools. A July 2020 IPA survey reported 185 digitalization efforts that are spread evenly across owners’ project lifecycle and support systems—document management support systems; project management, controls, and data managements tools; and performance metrics software—are among them. Figure 2 shows the distribution of the activities within the project lifecycle. “There’s not a clear digitalization focus area in our industry,” McNeil said, referring to technology disbursements across capital project systems. The end-to-end distribution of digital optimization efforts speaks to the need for interoperability standardization across a wide array of project activities. 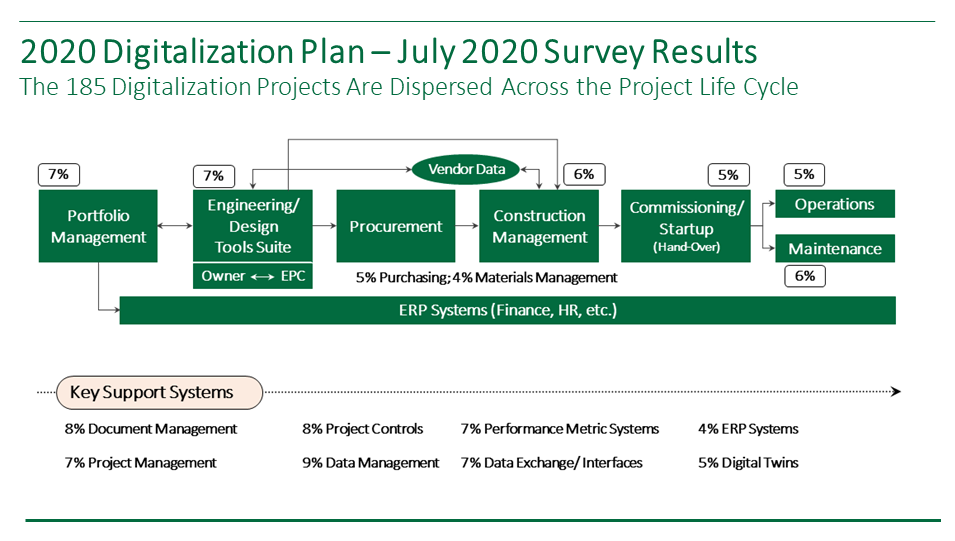 During the webinar, Alan Johnston, president of MIMOSA, an industry trade association dedicated to the development and adoption of vendor neutral information technology and information management standards, described how modularity, standardization, and interoperability have underpinned all three previous industrial revolution phases.

Industry 1.0 brought about standard gauge railroads and screw threads in the late 1700s, Industry 2.0 ushered in electrical and utility standards in the mid-1800s, and Industry 3.0 brought mechanical standards to the fore by the late 1960s. “It’s all about gaining efficiencies,” Johnston said.

Industry 4.0 is already underway, and the systems capable of open standards-based interoperability are currently shaping industrial digital ecosystems, including the open industrial interoperability ecosystem (OIIE) for capital projects. The standards for an OIIE for capital project systems are still being rolled out, according to Johnston. However, an OIIE oil and gas interoperability pilot has been making headway, with several associated OIIE use cases developed to document the development, deployment, and success of information systems.

Dr. Matt Selway, a research fellow with the University of South Australia and a working group leader, outlined the OIIE standardized information system use case methodology for the webinar participants. A typical use case development process entails identification of challenges or opportunities and capturing preliminary business and technical requirements. The use case scope and success criteria are then defined, and the main success scenario for the use case is recorded.

Following Selway’s comments on the creation of use cases for the capital projects OIIE, McNeil asked participants to list digital optimization opportunities for phases of capital project development, including construction, startup, operations, and maintenance. The lists of opportunities were collected and will be the topic of discussion at the working group’s next virtual meeting on December 17, 2020.

Follow this link to learn more about how to join the OIIE Capital Project Working Group and contribute to the initiative.