As organizations grapple with decarbonization policies and goals, many have looked to hydrogen as an energy transition tool. Hydrogen has the potential to decarbonize several sectors that cannot easily be electrified and could serve as a viable energy carrier in regions where electrical infrastructure is insufficient to meet renewable energy loads. The vast majority of hydrogen produced today is derived from natural gas and emits large amounts of greenhouse gases. However, with the addition of carbon capture technology, the process can be decarbonized to produce blue hydrogen. Alternatively, hydrogen can be produced without carbon through the electrolysis of water using electricity from renewable sources.

Although this new energy initiative is promising, making the transition can seem daunting. When a long‑time client of IPA’s decided to get into the hydrogen business, they called us looking for help with this new technology. This oil and gas company had potential markets for hydrogen—both locally and abroad—but needed more information on the pathway to an economic hydrogen new energy value chain to make strategic decisions for its future portfolio.

Commercializing hydrogen is something that has not been done before on the scale being considered. So how was IPA able to provide early cost and schedule benchmarks in this cutting-edge energy transition area? Our work for this client reflects our basic business model of research, development, and delivery. Using the tools we have developed over the company’s 30+ years, we applied our model building skills and used both proprietary and public data to build new models. We then used these new models to give our client the information needed to assess various pathways to economic hydrogen production.

The client was assessing various pathways for both blue and green hydrogen. IPA evaluated each step along the value chain to provide cost metrics, under different design capacity scenarios, that could be used in a very high-level business evaluation. The figure below illustrates the components we considered.

As shown above, each step has several options for the energy source, hydrogen source, transport medium, and carbon management. Summing the early benchmarks along the path results in a total cost benchmark that can be compared with other options along the path. For example, we could consider solar power as the energy source, producing hydrogen from electrolysis, and transporting it using liquefaction. As shown below, after the total cost for each scope is calculated (based on a capacity within the ranges identified), the costs are combined to give the total scenario benchmark: 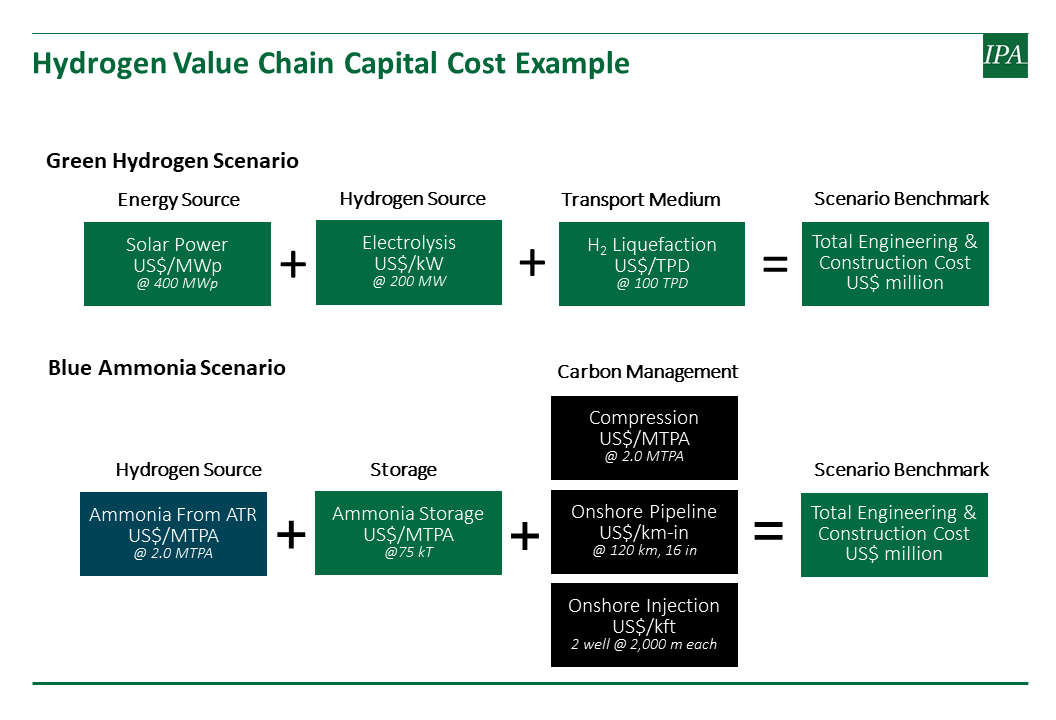 This benchmark then can be compared with another option along the pathway—for example, we could consider production of blue ammonia via auto-thermal reforming (ATR), with associated storage and carbon management.

Having these very early benchmarks provides our clients with the information needed to make high‑level business decisions about different hydrogen pathways. So, although carbon-neutral and green energy initiatives are new for everyone, the path to success in these areas is one IPA knows well. IPA can use its tested methodology—statistical analysis and data—to support strategies to commercialize innovative technology to underpin new green project initiatives.

As part of our New Energy Transition Initiative, IPA is helping clients implementing cutting-edge innovation—and those just beginning to consider green energy initiatives. Complete the form below for more information on how IPA can help your company move forward.